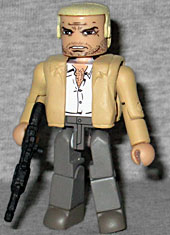 A former science teacher, Eugene claims to know the cause of the zombie virus, and is headed to Washington D.C. to help find a cure. The only communication he has with the government is via short-wave radio.

Other than the rifle, this is one of the plainest "civilian" Minimate figures there's ever been. He's wearing a khaki jacket over a partially unbuttoned white dress shirt, and is wearing plain pants. He looks like a high school science teacher or something! His hair should really be more of a mullet than this, but the fact that they remembered to paint his stubble and his chest hair makes up for it.

Survival tip: zombies need regular food intake in order to maintain their weight and mobility. A zombie with nothing to eat grows thin and eventually loses 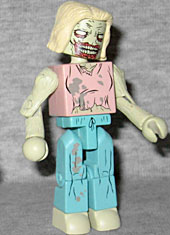 the ability to move around. Avoid fat zombies.

The control art for the Emaciated Zombie says she's based on page five of Walking Dead #53, but that's wrong: she actually comes from page one of #52. She's wearing blue sweatpants and a pink shirt, which is clearly a colorscheme that Art Asylum made up, since the book is in black and white. What's really impressive is that the stains on her clothes perfectly match the ones seen in the comic art. After a spate of "this zombie is extrapolated from half a headshot" zombies, it's nice to see one with clear inspirations. She has jaw-length blonde hair and no lips, and both her arms are the "beef jerky" one seen before - one of them is just turned backwards.