Today we reviewed the exclusive 1989 Batman figure from NECA by way of Warner Bros. So we should also take a look at the original version, too. 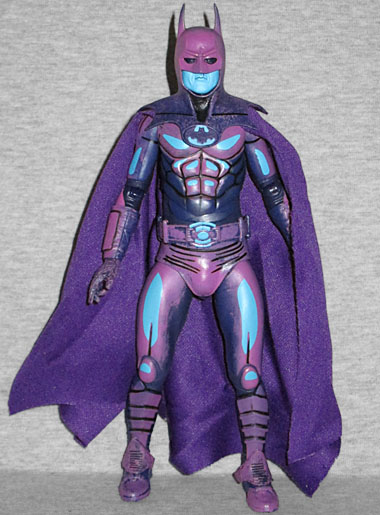 He's totally new. Totally tough. And he'll stop at nothing to make sure justice prevails!

From the dark streets of Gotham City 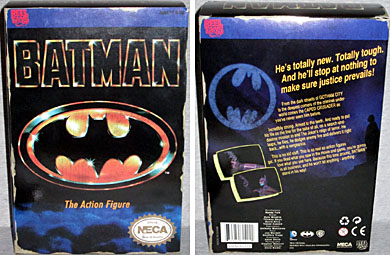 to the deepest corners of the criminal underworld comes the Caped Crusader as you've never seen him before.

Incredibly strong. Armed to the teeth. And ready to put his life on the line for the sake of all, on a search-and-destroy mission to end the Joker's reign of terror. He leaps, he flies, he dodges enemy fire and delivers it right back... with a vengeance.

This is no kid stuff. This is as real as action figures get. 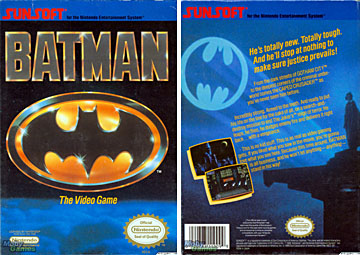 If you liked what you saw in the movie and game, you're gonna love what you see here. Because this time around, Batman is all business, and he won't let anything - anything - stand in his way! 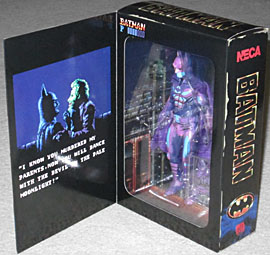 on the corners, so it really does look like it's been getting bumped around for 25 years. "Reel Toys" replaces the Sunsoft logo, and the badge in the lower corner presents the Official NECA Seal of Quality. The box is even shrinkwrapped, just as it would have been back then!

Once you strip the plastic off, a panel on the front opens, revealing a window allowing you to ogle the figure inside. The front flap has an image of Batman and Joker from the game (no, that doesn't mean NECA is making a Jack Nicholson Joker, stop asking), and the figure is in a tray meant to represent one

of the stages in the game. Stage 1-2, specifically.

Other than the "8-bit" paint, the figure 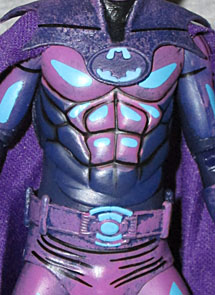 in the box is identical to the black exclusive - same sculpt, same articulation, same accessories, etc. That's why so many of us were planning to repaint him, until it was revealed that an official one was coming.

The colors are more "inspired by" the NES game than direct copies: we're not talking about Pixel Simon or anything, here. To make the character stand out from the generally warm-colored backgrounds, Batman himself was blue and purple (also possibly because this game started life as a comic-based release, and was only converted to tie into the movie after the fact - "blue and purple" is kind of videogame-ese for "gray and blue"), and the action figure follows suit. 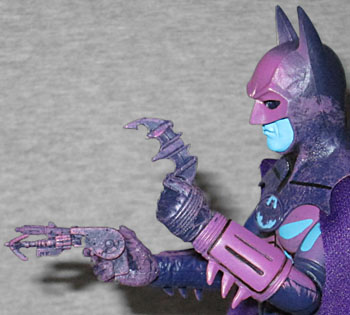 His base color is navy blue, most visible on his stomach - it's also the entirety of his back, but that's covered up by his purple softgoods cape. That makes the shadows, and then there's a bright baby blue for the highlights. The midtones are a purplish magenta, sometimes painted solid, sometimes airbrushed and fading into the navy (the light blue is all painted with hard edges). His hands, batarang and grapnel gun are all done in the purple, with a little bit of shading washed on.

If there had been any indication the WB-exclusive Batman was coming, I wouldn't have ordered this 8-bit version; a lot of people wouldn't. Heck, one of our readers finished his custom literally the day before the official one was announced. That had to suck. But even though this figure looks like a walking bruise or a photo negative of a Predator's thermal vision, he's still good. He can hang out with Detective Mode Batman and be weird together.