When paranormal activity is on the rise in New York City, the Ghostbusters are there to keep things under control for a price. Winston, Peter, Ray and Egon may worry about paying the rent, but they ain't afraid of no ghosts. No job is too big, no fee is too big!

Art Asylum made a whole bunch of Ghostbusters Minimates, based on both movies and the cartoon. And while that means lots of versions of the boys got made, their final Gb boxset featured one more of each of them, done to a new standard. They all have functionally identical uniforms (that being what the very idea of "uniforms" suggests), with the details painted on rather than sculpted chest caps. And the reason they did that? Because without chest caps, they could do removable proton packs. 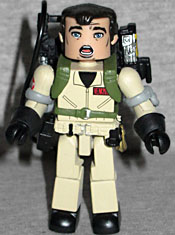 The uniform is, of course, light tan, and Peter Venkman wears his with the pants untucked and hanging over his boots - that's why he just gets black feet. Everybody else gets boots and laces painted on their shins. In the package, Pete's sporting a head that shows utter surprise: his mouth is open, and his eyebrows are pushed so far up that they nearly run into his hair (and considering how far Bill Murray's hair had receded, that's no small feat). His hair, which is the same piece all the other Minimate Peters Venkman have come with, still manages to cover up the wrinkles painted on his forehead - that's how surprised he is!

However, if you want a more cocksure, smug version of Venkman, the set still has you covered. There's a second head included, and this one is much more traditionally a-holish. His left eyebrow is arched (complete with a few small wrinkles painted around it), and the right corner of his mouth is drawn into a slight smirk. This is one mildly bemused face. 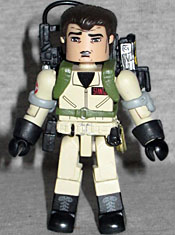 The uniform has a tiny Ghostbusters logo tampographed crisply on the right bicep, which is something the previous figures have had - and so are the gray elbow pads, which have even made it into other Minimate lines. The gloves, though, are new. New to the Ghostbusters - they're the flares used by any number of Marvel heroes. This figure has the same hair seen on (almost) every previous Ray Stantz, which means you need to pull it up slightly off the head in order to make the toy actually look like Dan Akroyd. He doesn't get a second head, so you'll only have the one dumbfounded expression, but he does come with an alternate piece of hair. Taken from the third Gb Minimates box set, it depicts a giant glob of melted Marshmallow Man that's fallen on poor Ray. 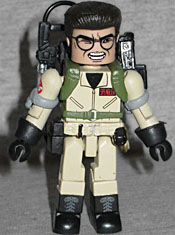 Since the boys no longer have chest caps, the details on their uniforms have to be painted on. All four have the same tampo, with pockets on the stomach, a zipper running up the front, and the collar open slightly to reveal a black T-shirt beneath. Of course, the nametag on the left breast is different, which is why Egon's chest says "Spengler" in big red letters. Not all Egons have used the same hair - the first two used one piece, but later figures switched to a better one. This one. It's taller and puffier, and looks great. Egon's grimmacing and squinting, which is the same expression "Gooey Egon Spengler" had, so maybe he's flinching from a pending onslaught of hot white goo.

That's not too far off the mark, really, because the set includes a second "marshmallow cap," and that one has a a second Egon head inside it. The alternate head is entirely plain, just an average Egon staring straight ahead. That's a nice inclusion, because as fun as a zany expression is, having an alternate look provides more variety for the figures. 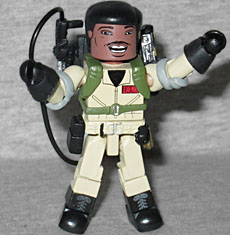 Another feature that these figures have to deal with due to the lack of a chest cap is the belt and all the gear that hung from it. In the film(s), everybody wore different things in different spots, but on these toys, all four are the same. We're okay with that. The belt has a coil of wire, several small black... items, and a removable radio. Like Ray, Winston Zeddemore only gets one head, but unlike Ray, he does not get any marshmallow to make up for it. His expression is super happy - after all, he's the one who closed the movie by proclaiming his love for said town, though to be fair he was covered in marshmallow when he originally said it. 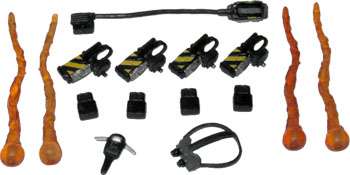 The set comes with a lot of extras: four proton streams, an open ghost trap, a PKE meter, a pair of Ecto Goggles, and four closed ghost traps that can plug onto the side of the proton pack. And of course, the packs themselves. They're the same mold as the packs seen on the Real Ghostbusters figures (because none of the previous ones had a peg for the ghost trap), they just attach to a green harness rather than to a full chest cap. We'll ask 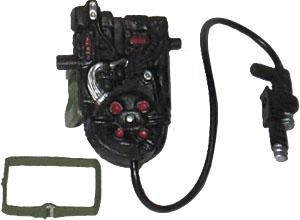 the same question of Art Asylum that we asked of Mattel: WHY DIDN'T YOU DO THIS IN THE FIRST PLACE?! Why wait until (nearly) the end of the line to spend the money that would have been recouped if you'd just made removable packs from day one? The important thing is we have them now, though. Oh, and since the proton packs had a belt that went around the waist to help hold it on, and that can't be sculpted on a chest cap or permanently painted on the chest, all four figures get a removable strap.

Even if you already have every Ghostbusters Minimate ever released, you'll still want this set for the removable proton packs and the new faces. This set includes the eleventh Peter Venkman, the tenth Ray Stantz, tenth Egon Spengler, and seventh Winston Zeddemore, but none of them are like anything seen before. I'm kind of tempted to get the Lego Ecto-1 to go with them - it's not like it's big enough for even the tiny Lego Minifigs, so ignoring the scale issues would be easy enough.