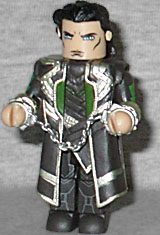 Loki is Odin's adopted son, and the brother of Thor. The son of the Frost Giant Laufey, Loki has never felt truly accepted by his family, and has waged war on both Asgard and Earth to win their respect.

Loki is wearing a complex chest cap that shares a lot of details with the one he wore in Avengers: it's just missing the big shoulderpads and a buckle across the chest. The colors are rather dark, like they were for everyone in the film. He doesn't have his helmet, so we get long black hair for him, and because of the events of Avengers, he comes with a pair of fancy handcuffs that fit behind her hands. 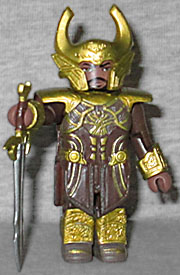 The far-seeing Heimdall is the keeper of the rainbow bridge, Bifrost, and controls all passage between Asgard and the other realms. He is also a fierce warrior, and defends his post with an unbridled fury.

Remember when a bunch of white-power racists tried to boycott the first Thor because Heimdall was black? And their efforts proved to be as useless and weak as their inbred cracker genitals? Good times, good times. It's hard to tell, but Heimdall got a new costume for Thor 2, and this Minimate duplicates it nicely. He wears a new chest cap that has Yggdrasil sculpted in the center, fancy new greaves that look like hammered metal, and bracers that appear to have the hammer of Thor on them. Or at least a big T.

Heimdall comes with his sword, which, unlike this one, is the right height. Of course, that's easier to do on a 2¼" Minimate than on a taller action figure; it's just a question of a quarter inch. You can remove his helmet, for a more casual Heimdall, and although his eyes are painted gold, they appear brown unless you look very closely. They need some more yellow in them.