To free Earth from the control of Ultron, Wolverine must go back 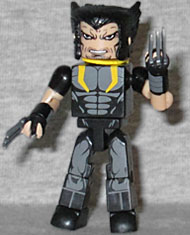 in time to kill Ultron's creator Henry Pym, a.k.a. the Avenger Ant-Man. But killing Pym may lead to a worse future than the one Wolverine has just left.

A momentous occasion! This is Wolverine #50. Like Iron Man, Wolverine showed up at the beginning of Age of Ultron with a new costume and no explanation. The weird thing is, it's a version of the costume he wore as "The Hooded Man" in Mark Millar's forgettable Fantastic Four run - a black body (painted with nice grey highlights here), yellow stripes over the shoulders, and even a yellow hood that he never bothered to wear. Why did he have a new costume? Why did he never wear it again? No one knows, but it works okay as a Minimate. 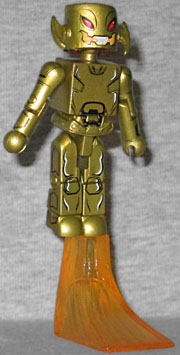 While Ultron himself sits in his empire in the distant future, his drones have established a beachhead in the present day, purging humanity via orders from the future, relayed through the body of the Vision.

As spoiled in the previous review, the victorious Ultron never appears in Age of Ultron, just his golden drones. Did he find a way to time travel to the future, or is he just holed up in a secret cave somewhere, offline and hiding? The crossover really raised more questions than it answered. The chest tampo is the same as on Conqueror Ultron, and he has painted details on his arms and legs. The waist

is a sculpted piece, and so is the head. Yet again, there's a translucent head under the cap, with a white outline version of the drone's face printed on it. We still don't know what that's about. The Drone does come with an orange flight stand, since they just kind of flew all over the place, rarely landing.

In the Age of Ultron Minimates box set review, we predicted half this set: yes to Wolverine, but we thought he'd come with Invisible Woman. The Ultron Drone makes a lot of sense, but since there was an army of those, why not one set with Wolverine and an Ultron, and a second with Sue and an Ultron? Or any of the alternate Defenders from Earth-26111. It's way too late for that now, because any "Age of Ultron" toys released today would be confused with the movie (which is both better done and more memorable).