One of the few X-Men who was still active in 1973, the Wolverine of 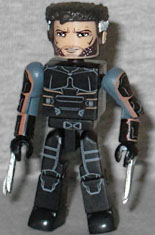 2023 must send his mind back to the past in order to stope the events that led to the nightmarish future world he lives in.

Boy, were the fanboys ever livid when they found out Days of Future Past would be sending Wolverine through time instead of Kitty Pryde! Did they forget that in the original, "Katherine" was an old woman sent back to the mind of a teenager? There's no way to use her in a movie set in the '70s, which is why we've got Wolverine #53, here. He's wearing the black X-Men uniform, with desaturated blue and gold detailing on his sleeves. His face is the same as Past Wolverine's, just with the mouth open slightly - no extra wrinkles or anything. The only concession to his age are the white streaks in his hair.

(And really, did anyone else hope the "Rogue Cut" was going to include THE pose? How do you not homage that? It could have been the movie poster, if nothing else!)

The world has been conquered by the Sentinels, robots 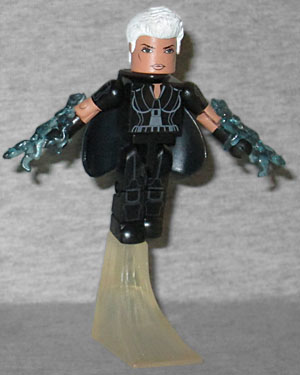 created to hunt mutants and protect humanity, but who now hunt both. In 2023, Storm and the X-Men must work together to stop the threat.

Well, well, well, look who it is! This is our second movie Storm, though this one is given more realistic details, because that's how Minimates are made now. Her uniform has short sleeves, but long gloves, and she's got the same cape as Monica Rambeau. That bit of re-use means there was room in the budget for a new hair piece, so win-win. The figure also comes with a whoosh stand and lightning bolts for her arms. And since one of the movies' cleverest conceits is that Storm's eyes go white when she's using her powers (nicely matching comic artists' tendency to forget to draw her pupils), we also got a second head with blank eyes.

We weren't actually supposed to get

this Storm - she was a last-minute replacement. When Series 58 was first solicited, her place was taken by Rogue; but when Rogue's scenes were cut from the film, her figure was dropped as well, and all the listings were updated to show Storm instead. It's a shame they couldn't find a way to release Rogue once the director's cut came out; maybe a two-pack of her and Iceman?