The Vision is a sentient artificial intelligence housed in a highly advanced synthetic body. Since joining the Avengers, Vision has endeavored to further understand humans and his place among them. Though he has yet to come to a definite conclusion, Vision knows it is his responsibility to use his incredible powers to protect the world in which he now lives.

Vision head, suit body. Wow, that was an easy review, wasn't it? He didn't dress like this in the movie; he wore slacks, a sweater and an ascot, like 1940s Cary Grant. The idea - casual Vision - is the same, but you're left to wonder if this is based on early concept art, or if AA chose it just to save production money.

A product of secret Hydra experiments, Wanda Maximoff once believed the Avengers to be her enemies. However, after fighting beside them to protect her homeland in the battle of Sokovia, she realized that her one-time foes were 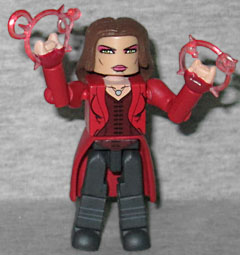 in fact a force for good. As the Scarlet Witch, Wanda must learn to control her uncanny powers in order to aid humanity alongside her new allies.

It's weird that this is the only way to get a Civil War Scarlet Witch is in this set. Actually, between that and the lack of an Ant-Man, Team Cap is really getting shortchanged! (Full disclosure: the back of the box shows an Ant-Man that's different from this one, but it hasn't been released anywhere.) Wanda is wearing a more "costumey" outfit than last time, with a long red coat over dark pants. Same hair, though. They did consider including her familiar headband, which would have made this look a lot like her Uncanny Avengers suit. Like that figure, this exclusive gets the "hex" hands to make her more magical.