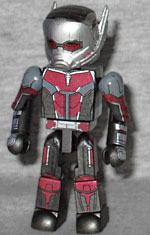 A former thief who proved himself a hero, Scott Lang was entrusted with the astonishing Ant-Man suit, a uniquely sophisticated piece of technology that allows him to shrink in size but increase in power. As Ant-Man, Scott Lang is able to handle the jobs "too small" for any other hero.

The Ant-Man suit was redesigned slightly for Civil War. It didn't look substantially different on-screen, but if you compare this Minimate to the last one, you can see what's changed - in other words, this isn't just a straight redo of what we had before. The details are more complex, and they've been created well here.

He gets a new helmet, with larger antennae and a fully enclosed mouth. The red lenses (and the eyes behind them) are painted on the front. You can remove said helmet, revealing a Paul Rudd face. Well, Paul Rudd-ish. He's looking pretty angry, and also has some mighty stubble. The hair is the same piece the previous figure came with, which makes sense.

A former Air Force pararescue who went on to work with recovering veterans, Sam Wilson aided the legendary Captain America 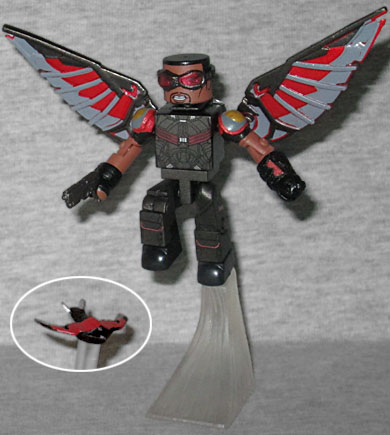 in adjusting to modern life, quickly becoming Cap's close friend in the process. Using an experimental winged harness, Wilson takes to the skies as the high-flying Falcon.

Falcon actually gets something resembling a costume this time, rather than just gray camo. The gloves, goggles and upper arms are molded pieces, while all the detail on his chest and legs is just painted on. His wings are new. They're single pieces that plug onto his shoulders, and have sculpted, rather than painted, lines. The goggles are removable, and he's armed with a single pistol. There's a new backpack piece to give him his engines, and a single-foot swoosh stand to let him fly. Plus, the set includes the Redwing drone, and a hover stand to hold it in the air.

Ant-Man is cool and all, but Falcon is the surprising star of this set.