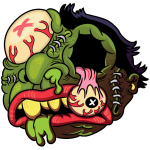 Slobulus can't take a joke, can't tell a joke, and is often the butt of jokes. Some say he lacks vision, but who are we to judge? 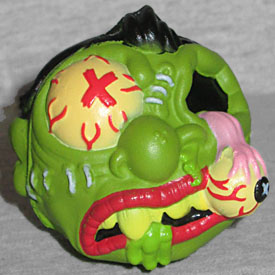 Slobulus is a pretty lazy design, and has been since he was first introduced in the '80s: he's just a collection of "gross" things, with no real cohesion or sense to the design: cracked lips, crooked teeth, an eye popped out of its socket, scars, stitches, snot, greasy hair... if you asked a bunch of 8-year-old boys to design the coolest thing ever, they'd come up with Slobulous with machine gun hands. The green of his skin is nearly the same color as the green of his snot, so they pretty much run together. Frankly, Slobulus is just

kind of "here," not really anything special or creative.

Series 2 of the blind bags featured "Mix-Ups," re-releases from Series 1 with new colorschemes. In that series, Slobulus was turned pink, with green lips. It still isn't really a great design, but the pink version of him is no worse than the green version was.