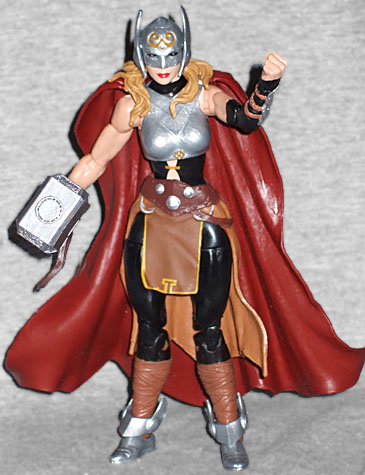 Since the Thor in the Battle for Asgaard set is almost entirely identical to the mass market version, we won't be giving her her own individual review, just this quickie here.

The sculpt is the same on both figures. Thor gets the curvy body with a new chest, left forearm,

and shins. Her paint gets a few minor differences, generally making her simpler than the box set version: her pupils are a silvery white, rather than blue, the browns used for her belt and shin-wraps have more orange in them, and her loincloth and waist-cape are the same tan, rather than one being brown and the other olive. 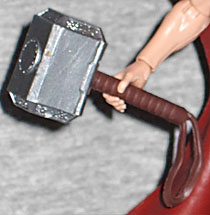 Her only accessory is Mjolnir, because she's worthy to carry it. In the SDCC set, the hammer was molded from translucent blue plastic, then given dark brown paint apps on the handle to make it look solid. In the normal release, the hammer is a more typical silver, and the handle is a lighter brown. Only her right hand is open to hold the hammer, with the left being closed into a fist.

You may still want to get the standard Thor, because she comes with pieces of the Gladiator Hulk Build-A-Figure. Randomly, she gets the left leg, and the shoulder armor. That's not a pair you expect to see together!