We've told you about Rubin vases before. Here's another one: 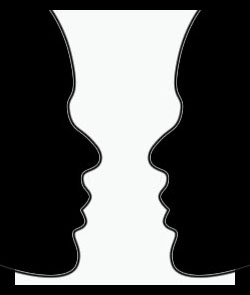 In order to properly create the illusion of the vase, the two faces on the sides need to be the same, obviously. Therefore, it might surprise you to learn the source of the face in the image above.

Believe it or not, both sides are Emma Frost: 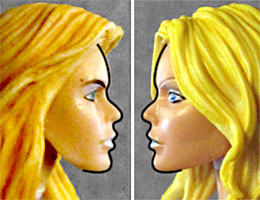 On the left, that's the old ML1 Emma Frost, renowned for being weird and ugly. On the right is the new, improved Emma from the Wolverine Legends line. Adjusted for size, the two figures have nearly identical profiles.

Sure, if you really get up close and compare the two, there are definite differences - the angle of the jaw, the fullness of the chin, the depth of her brow - but the similarities are stronger than the differences. The shape of the mouth is identical, the nasolabial folds line up, as does the ocular orbit and the position of the nostrils. Compare the Emmas to other characters released twice, such as Bucky Barnes or Clint Barton, where the different figures look nothing alike, and this is a stunning level of sameness. If it's not an intentional move on Hasbro's part, then it's a remarkable coincidence.

So while the new Emma may look better, it doesn't mean she actually has a new face.

This entry was posted in addendums, Hasbro, Marvel and tagged Marvel Legends, X-Men. Bookmark the permalink.