When Nick Fury discovered that the nation of Latveria was giving 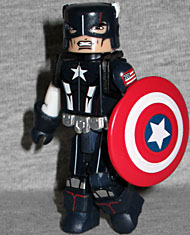 super-villains new, high-tech weaponry, he enlisted a team of superheroes to engage in a stealth operation on Lateverian soil. Captain America was among the team's members and he wore a modified, black version of his regular uniform.

Notice that this is Secret War Captain America, not Secret Wars Captain America - that little S makes a difference. Secret War is the story that kicked off the series of events that are still rippling through the Marvel Universe to this day. You have to wonder, though: why, if this is supposed to be a stealth mission, does it look so blatantly like Cap's normal suit? USAgent looks less like Captain America than this costume does, and USAgent is best described as "Blacktain Ameriblack."

The things that would be blue on the regular costume are black. The things that would be red on the regular costume are black. So he's really just wearing black and white, with silver accents. And yet his shield is the normal colors, and he has a small American flag on his shoulder. You can remove the mask, and replace it with a new blonde buzzcut.

In his youth, Brock Rumlow signed up with the Taskmaster's school 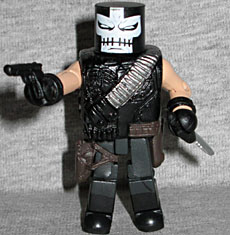 for criminals, and quickly became an instructor. Recruited by the Red Skull, Brock served the Skull loyally until he was captured and forced to join the Thunderbolts. He recently gained the ability to fire energy beams from his face.

Yeah, that didn't last long - he was back to just being "strong guy who fires guns" within five issues. This figure is the more modern Crossbones, who's wearing a tactical vest instead of a wrestling singlet. It's the same vest Gabe Jones had, though it doesn't have the working holster glued into the the right side of the belt. 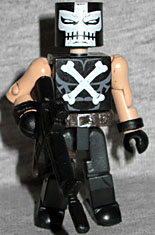 He does have a holster on his right leg, though, and a pistol to fit inside it. He's also armed with one of Warpath's knives, with a black handle and handguard, and also has an AR-15 that we've seen with several different Minimates in different lines.

If you remove his vest, the chest beneath is painted with the classic Crossbones costume - a black sleeveless shirt with white crossed bones in the center. He has a brown belt and a SWAT harness that you can put on, but the harness blocks the bone design. It might have been too complex to put white apps on the front of the straps, so they'd line up with the design and keep it looking complete - but it'll be an easy thing to customize yourself!