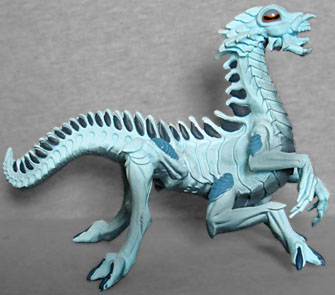 Characteristics:
The Alien Dragon is rearing up, flaring its mandibles and showing its sharp teeth. Its front legs are ready to strike, while its rear legs are poised to leap at a moment's notice. This beast is covered with tons of extra-terrestrial details, from its bulging eyes to its segmented tail.

Size and Color:
Its main coloration is light blue above that fades to dark blue below, with dark blue webbing between its back spines and blue accents on its legs. Its eyes are grey, with black oblong pupils surrounded by an eerie orange red.

History
The Alien Dragon's origins remain a mystery, though many believe it originally came from the stars, emerging from a smoking crater after crashing down to our planet from high above. It seems to have more in common with insects than with most dragons, with its segmented exoskeleton, six legs, and pincer-like mandibles. It lacks wings, so it instead uses its rear legs to jump over huge distances to get where it needs to go.

This entry was posted in addendums, Safari Ltd and tagged Alien, dragons. Bookmark the permalink.