The gimmick of this year's "Power of the Primes" theme is that the Transformers can join up with various "Prime Masters" to gain new powers. When you buy a Deluxe, Voyager, or Leader Class figure, it includes a card revealing the powers granted by one combination. Just one. Out of 12. So here's a list of all the powers Slug can gain: 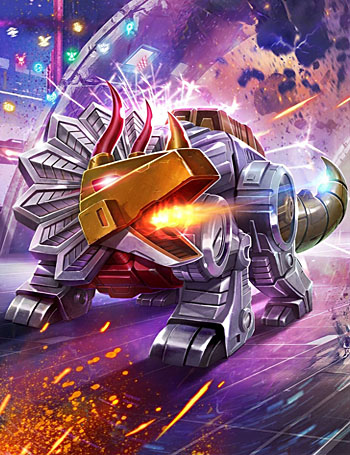 Alchemist Prime
Lowers the melting point of any substance.
Alpha Trion
Uses his strength to stop conflict, not incite it.
Amalgamous Prime
Shifts shape as fluidly as fire.
The Fallen
Erases enemies from existence.
Liege Maximo
Can goad anyone into a fight.
Micronus Prime
Power-links to share his fire breathing ability.
Nexus Prime
Combines with others to do maximum damage.
Onyx Prime
A loyal guardian who fiercely defends allies.
Prima
Charges into battle with a blinding white light.
Quintus Prime
Gives life ability to rise from the ashes.
Solus Prime
Forges weapons from the melted metal of his enemies.
Vector Prime
Time-travels to challenge history's greatest warriors.