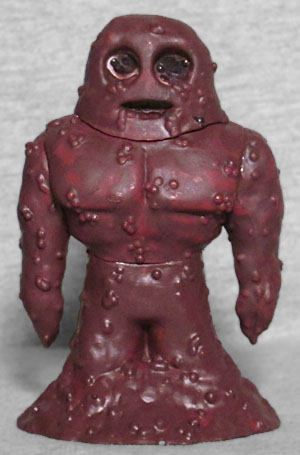 Million Ants is a sentient ant colony who's taken the form of a man in order to fight for justice. He doesn't play well with others, possibly because of his tragic origin; he uses his power responsibly (though it's also a burden to him) and never gives up. He's a hero!

Million Ants, aka "Snuzzles," aka "Wiggly Turd Man," is the team shapeshifter, using the numerous ants (I'm not sure how many of them there are, exactly) that make up his body to change into any shape needed... as long as it still looks like a pile of living ants. It's not like he can pass for human the way Clayface can, you know? And he's functionally immortal, since any time any of his ants get killed off, the queen just lays more eggs, bringing the number right back up. Now that's powerful!

The Rick and Morty Mystery Minis have oversized heads, 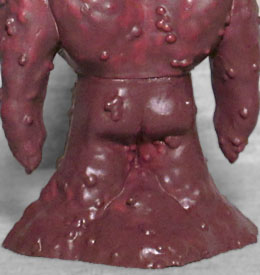 but Million Ants really doesn't - his is about as proportional on this toy as it was in the cartoon, making him look smaller than all the other Vindicators. His right eye has a pale ring around it, like dried glue. His legs disappear into a pile of ants, but his pose is otherwise extremely straightforward and staid. Way to just stand there, Million Ants. There are little bumps sculpted on the surface, and his body is brown with a few red flecks painted on.

Million Ants is a GameStop exclusive, but while the packaging claims he's available in a super-rare 1:72 ratio, the entire assortment is 1:12. You should be able to find him in one of the middle boxes - either left or right side, top or bottom layer. And he's easily the heaviest thing in the case, so getting him will be easy.