Season 3 of Rick and Morty introduced the Vindicators, the galaxy's greatest team of superheroes! And Series 2 of the Rick and Morty Mystery Minis allows you to collect the whole team (as long as you're willing to go to a lot of different stores, because they're all exclusives). 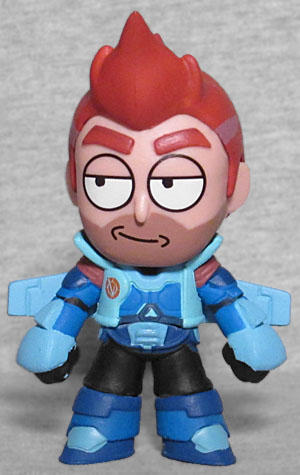 Vance Maximus, Renegade Starsoldier, is the leader of the Vindicators. He doesn't play well with others, possibly because of his tragic origin; he uses his power responsibly (though it's also a burden to him) and never gives up. He's a hero!

Vance is a hero in the vein of Star-Lord: a seemingly normal guy with access to high-enough technology to enable him to lead a team of space heroes. Thanks to being voiced by Christian Slater, he's even got the cool charm thing working for him. Heck, the only thing he's missing is some kind of battle mask!

The Mystery Mini does not 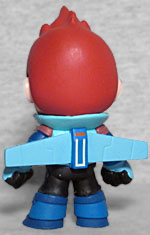 have any sort of dynamic pose. Any sort of pose at all, really: he's just standing there with his arms at his sides. Your elementary school teacher would be proud of him for being so well-behaved while standing in line. He's wearing his blue battle suit with the Vindicators vest over it, and has the wings of his jetpack expanded. His colorscheme is mostly blue, which contrasts with his pointy red hair. The grey streaks on his temples are painted, as is his stubble and the smirk on his face. The Rick and Morty Mystery Minis only have painted eyes, not sculpted in like the Walking Dead ones (after Series 1), but they do have noses.

Vance Maximus is a GameStop exclusive, available in a 1:12 ratio. There seem to be several different case layouts, but you can reliably find him in one of the middle boxes - either left or right side, top or bottom layer.