The eighth series of the Imaginext Blind Bag Figures is pretty fun. There's a nice mix up characters, genres and colors here. 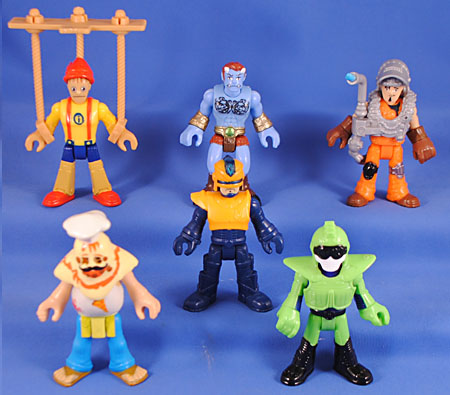 The background color for Series 8 is gray and silver... a bit of an odd choice since this is the first "not a color" shade, but it does continue helping differentiating itself from previous series', making easier to spot - which is nice. The arrangement of the character is pretty good, though the Welder's silver gear does kind of blend in to the gray background. The silhouettes on the back are solid yellow, which I believe is the first time the silhouette colors haven't matched the background color on the front, but I suppose the gray or silver foil didn't look good for the designers. As always, these figures are coded for easy finding (it's a number pressed into the foil at the top left of the back of the package, above the "i" logo) and the code is included below with each figure. 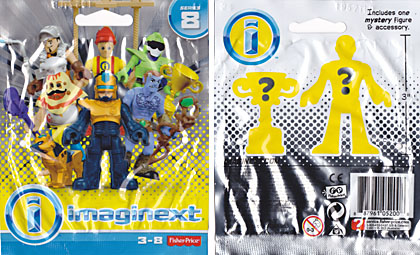 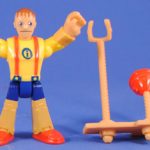 Pinocchio! Toys of toys! I love it! This is a really fun idea and it's one of the most fun figures in the whole line. The sculpt is excellent, loaded with wood grain and neat blocky legs. I really like the suspenders (see, Series 6 Gnome? See!? Look how much simple suspenders can help break up a sea of color and give a nice contrast!?) and they help sell the reference. The head is kinda odd, though, with his sort of dead expression and big eyes. The hair is weird, and it reads more like the scorch marks from an electric chair (cf. Johnny Bartlett from The Frighteners). His accessory is a four-piece assembly to turn the figure into a marionette. There are clips for his wrists and a little cap for his head (electric chair!?) and they all line up pretty well, it's just really weird and a bummer that they're cast in the same color of plastic as him, which kind of makes it seem like he and it are one big block of wood. And due to the firmness and style of the articulation, you can't actually puppeteer him, alas. Still though, he's a super fun and darn clever figure! 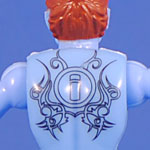 This is a weird, neat fantasy figure. It's nice to get something a little different AND that's so heavily blue(ish) since these Imaginext figures really tend to favor the warmer colors. He's some kind of faun, or at least I think his feet are hooves, but he could just be wearing hooves as shoes. The sculpt is nice and the paint is good. He's got a big, elaborate black tattoo across his chest ...which really comes across has thick chest hair until you look closely at it. An interesting choice... But, like the Chinese Fighter in Series 7 he has a big tattoo on his back as well, and it encircles the Imaginext "i" logo. His sole accessory is a really cool gnarled wand/staff. The sculpt is nice and complex, especially for an Imaginext accessory, and it even has a little jewel nestled in the top. This a cool little figure. 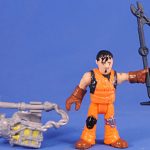 This is kind of an interesting figure because he reads as a basic welder as first glance, but his outfit and mask are a bit more elaborate than necessary suggesting he may be some kind of post-apocalyptic guy. His bright orange overalls seem to have various bits of metal detritus sculpted on (though not painted) and there are notable stitches on his gloves. He comes with a combination crowbar/cutters tool and, of course, a wearable welding kit with the tanks on his back which feed to a connected torch and a flipped-up welded together mask. The torch can even attach to clamp on the chest - nice! He's fun for what he is but I do wish his welding mask was flipped down. Thinking of this guy as some sort of post-apoc mechanic has actually got me wishing Imaginext would do a whole line like Mad Max because I imagine they could really go nuts with the vehicles! 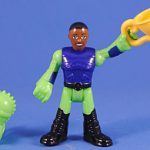 I've never been a fan of the "X-Treme" sports figures in this line, so obviously I'm non-plused by this guy. It's just not a very interesting design and the colors aren't that appealing as done here. He looks like a motocross guy to me which makes him seem pointless without a motorcycle or even a simple dirt bike. In lieu of some, or any, clue as to what he is we get another championship cup - which is, in fact, just reused from the Soccer Player in series 1! So at least he's a winner. It's nice to have another black character since there hasn't been one since Series 4, which also makes this only the second in the whole line, but beyond that I fail to see the point of this figure. 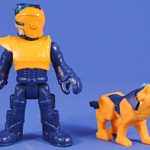 Woo hoo - fake Robocop!!! This guy is super rad and a cool pseudo-space man take on the beloved Robocop costume. This guy's design is pretty great with a very detailed body that is a bit ambiguous - is it armor or is he a cyborg or does it even matter? I quite like the juxtaposition of the dark blue and orangish yellow and they immediately infer "police officer" for some reason. I do wish the blue arms, legs and torso had some additional color to them, but what are ya gonna do. I dig the extended shoulder armor on his right side which even hearkens a bit back to Judge Dredd, which is pretty cool. His head is the real star here - it's a great mashup of sci-fi iconography and in a really cool move the head is cast in translucent blue so that the helmet fin acts like a light-pipe for the visor! The otherwise fully painted helmet does block a lot of light, though, so it'd have been nice if the fin continued down the back or if there was more unpainted space on the back of the head or something. Still, though, it's cool! He comes with a rad robo-dog that calls to mind the classic K9 German Shepard breed, and uses the same colors as the cop but inverts them. This is a very, very cool set but I do wish they could had done a bit more with the paint or given him a gun or baton or something. Regardless, this is a super cool toy! 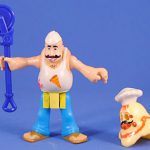 Who doesn't love pizza!? This is just a flat-out nutty design and a weird but lovable figure. He's got fairly standard legs and arms for Imaginext but a big new fat-belly body with a matching, and unarticulated, fat head. He's a goofy caricature of, like, the classic New York pizza slinger, complete with stained tank top, big mustache and flip flops. He comes with a big pizza cutter wheel on a staff, which is fine but it really seems like one of those big, long pizza spatulas would have made more sense. He also comes with a removable... "mask" which is a sloppy pizza that has a chef's hat atop it! It's a fun idea, that his pizza has fallen in his head, and I can even roll with there being eye holes, but why would he have put his chef hat ON the pizza? And why does the pizza have a mustache? Is he supposed to be Spaceballs' Pizza the Hut? Who can ever know for certain, such are the mysteries of the Imaginext designer! This is just a weird, goofy, novel little figure but is a fun addition. (Even his printed-on open mouth graphic looks weird on his sculpted smooth face.)

This entry was posted in codes, Mattel, Rustin's Spoils of the Week and tagged Imaginext, Robocop. Bookmark the permalink.