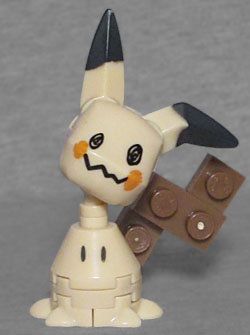 A lonely Pokémon, it conceals its terrifying appearance beneath an old rag so it can get closer to people and other Pokémon.

That is seriously the cutest thing ever: Mimikyu is a ghost/fairy type Pokemon who disguises itself as Pikachu so that people will want to be its friend. Precious! It carries a bent stick to simulate Pikachu's tail, but since it doesn't have any (visible) arms or legs, its only articulation is a swivel for the faux tail and a balljoint for the head. Still better than papercraft, though. The body is beige instead of yellow, and the tail is completely brown.

Mimikyu is built from 16 pieces. Its head is constructed exactly like Pikachu's was, and it even uses the same ears. Well, "ear": one of them is bent, rather than straight. Its face looks like it was drawn on with crayons, which is accurate to the design: big swirly eyes, a jagged black line for the mouth, and red cheeks. There are two smaller dots on his chest - those are the eyeholes Mimikyu actually looks through. 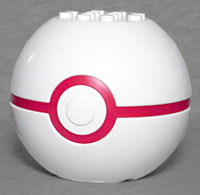 The single-packed Pokemon Mega Construx are cleverly sold inside pokéballs. To help set each series apart on the shelf, the specific style of ball changes. Series 3, of which Mimikyu is a part, comes in a white ball with a red stripe - a Premier Ball, which has the same stats and capture rate as a regular ball, "but it looks cooler." Studs on the top and the interior allow you to display your Pokemon, and it can be stored inside without disassembling it.