Today we reviewed Jack Lee, one of the human figures in Zombie Lab Wave 2. Well, he's also one of the characters to get a Kickstarter-exclusive variant. 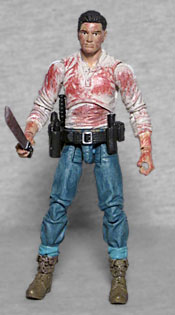 The sculpt of the variant figure is identical to the normal release, with the same boots, jeans, and shirt with the sleeves pushed up nearly to the elbows. It has the same head as well, not a sculpt with a different expression or anything. No, the difference is all in the paint.

While the standard figure is clean and pristine, depicting Jack on Day 1 of his insertion into the Hong Kong exclusion zone, the variant makes his shirt a slightly darker shade, like he's been wearing it it through lots of dirty places. Oh, and also, he's absolutely covered in blood! His face and forearms have a few splatters of the stuff, 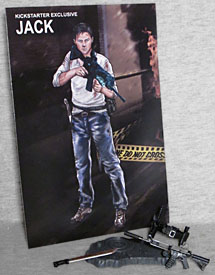 but his shirt has been smeared with red all over the chest and arms. It's not on his pants or his back, but you can tell he's been in some fights.

The figure has the same accessories: a rifle, a pistol, a knife, a machete, a tactical pants-retaining system, and a display base. He's also got a card that shows the same character art as the regular release, but features a different background behind him and the first chapter of the story on the back.

This entry was posted in blog exclusive review, Kickstarter and tagged zombies. Bookmark the permalink.