Between Series 1 and Series 2 of the Transformers BotBots, there was a bonus series. Call it "Series 1½" It was intended to be a Toys "Я" Us exclusive, but their closure meant that couldn't happen (in the US - TRU Canada still released them). Eventually Amazon picked them up, meaning the Lawn League was at last let loose upon the world! 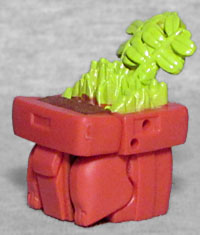 It's hard to tell the difference between the Lawn League and the Shed Heads - both groups feature both plants and tools. This potted plant's design is fairly straightforward: a squarish red pot with some pebbles, some short grass, and a few tall, leafy fronds in the back. Unlike on Series 1's Stinkosaurus Rex, the color of the dirt in the pot is different from the color of the pot, so it's more clear they're not the same thing. The leaves are a lighter green and there's no stray paint giving away the existence of the altmode. So overall, a better look.

None of the Series 1½ figures appear on the website or in any of the official merchandise, so there's no biographical information for them other than what 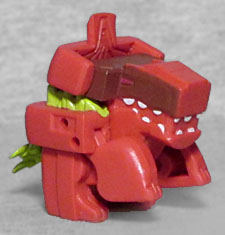 we can glean from what little art there is on the packaging. The group shot shows Bum Sprout merrily munching on some mulch, straight from the bag, so let's say... they're always hungry because the other Lawn Leaguers expect them to be the team's pack mule?

Bum Sprout is the only use of this mold to not have a name ending in "Rex," but that doesn't change the altmode: a tiny little dinosaur. They stand on their rear legs, with the front arms dangling. The tallest leaves form a tail, and there are tiny red eyes on either side of the head. The face, hind legs, and the tail work pretty well, but the arms are so big that the T. rex look is undermined, and the kibble around the head is hard to ignore. 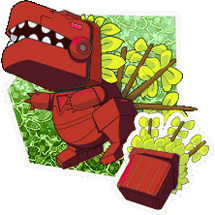 After Bum Sprout, this mold was also used to create Greeny Rex and Bogusaurus Rex. Bum Sprout is available in one Bakery Bytes 5-pack, and both Lawn League 8-packs.