Franken Berry was created at the same time as Count Chocula - they're both following Lucky Charms' lead, by mixing puffed grain cereals with 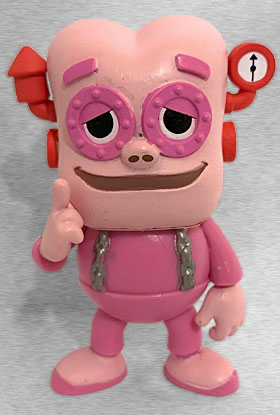 marshmallows, just in different flavors. A lot of countries don't have marshmallows in their cereal even today, because they consider marshamallows to be candy, not fruit. General Mills wanted to introduce both cereals at the same time, which is why Laura Levine worked to create two characters who fit a common theme.

Since Franken Berry (the cereal) was the first strawberry-flavored cereal, Franken Berry (the character) is bright, bright pink. The original design gave him fingernails shaped like strawberries as well, but this Mini lacks any such thing. C'mon, Funko, he's already holding one finger up by his face, would it have been such a dealbreaker to put some red paint on there? He's got sleepy eyes, which go along with his faux-Boris-Karloff voice (originally performed by Bob McFadden - aka Thundercats' Snarf, among others - but these days by Rob Pruitt, who also voices the Blue M&M).

Frank shows his influences thanks to the plates riveted around his eyes, plus the steam whistle and pressure gauge sticking out the sides of his head. because he's a big, burly character, he uses chains as suspenders - those get a silver paint app, which is rather sloppy, it must be said. Also, the fact that the tops of he feet are the same sort of pink as his skin makes it look like he's wearing slippers instead of shoes. Is that the idea? Hard to tell. There's a big ugly seam around the base of the head, but that adds to the Frankenstein feeling, doesn't it?