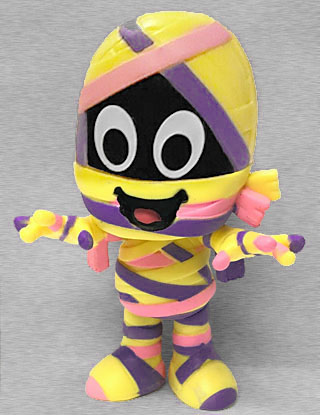 After Fruit Brute folded in 1982, that left General Mills with only three monster cereals: Franken Berry, Boo Berry, and Count Chocula. They tried again in 1987, using the same fruit-flavored cereal but swapping the lime marshmallows for vanilla and calling it Fruity Yummy Mummy. Apparently they thought the reason Fruit Brute failed to catch on was the mascot, not the flavor? That's just silly - what's a mummy got that a werewolf doesn't? [An appeal to bondage kinksters instead of furries? --ed.] And that only lasted until 1992, three years less than its predecessor. Since they originally had the same cereal pieces, when Frute Brute and Yummy Mummy were released from the tombs in 2013, they both had to have new flavors: FB was now cherry, and YM was orange cream.

The Yummy Mummy has a quite intricate sculpt, by Mystery Minis standards: all his overlapping bandages have been molded with a bit of depth, rather than 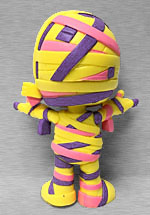 only being painted on. It makes for a great-looking Mini, though the way the head is molded means the upper part of the face might get misaligned from the lower part: if the eyes aren't centered over the mouth, you'll have to boil or freeze the figure until you can pry the glue apart, then reposition the upper half of the head.

The pose may seem dull, just standing there with his arms up, but isn't that how the Mummy (the Universal one) is generally portrayed? Shambling around, dragging his feet and reaching straight ahead to grab his victim? It works. Yummy Mummy is available in a 1:24 ratio, which unexpectedly makes him more plentiful than Boo Berry.

Sadly, Ad Icons Mystery Minis is not one of those series where the figures are shown to have one ratio, but then all end up at 1:12 - from the 1:6 Count Chocula to the 1:72 Fruit Brute, their numbers are all over the place, making assembling a full set frustrating at best and literally impossible for everyone. At minimum, there are 12 times as many Choculas in existence as there are Fruit Brutes, which is foolish! One, nobody loves Count Chocula that much, and two, at least the three main monsters should have been available in equal numbers. Make Choc, Frank, and Boo all be 1:12, and then put Frute Brute and Yummy Mummy in at 1:24, making them alternate a slot. That would give everybody a fighting chance at them, and even if you didn't score the whole team, you'd still have the power trio to stand in that cardboard Monster Mansion from a few years back.