Of course this is the one Ad Icons Mystery Mini 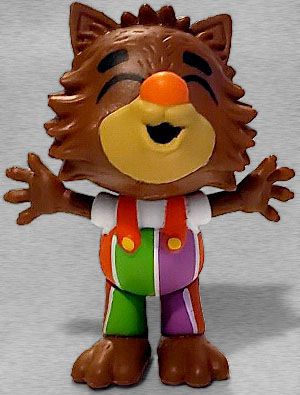 I wanted most of all, so of course it would be packed in a 1:72 ratio, the rarest in the line (tied with the Jolly Green Giant's little sidekick, Sprout), and of course eBay people are trying to get upwards of $70 for him. Special shout out to the guy who wanted $150 for a set of all five of these $8 figures, but got super indignant when I "best offered" him $50. It's more than you paid, scalper, take the win! And stop declining my offers!

Fruit Brute (the cereal) was introduced in 1974, a year behind Boo Berry. It was a multi-flavored fruit mix with lime-flavored marshmallows, but failed to connect with buyers and was retired in 1982; when General Mills brought it back from the grave for 2013, it was now cherry flavored and had been renamed "Frute" Brute, because it didn't actually contain any fruit. Like when you buy chicken "wyngz" or "krab" legs. Or Papa John's "pizza."

Fruit Brute (the character) is a werewolf, because even dumb '70s kids 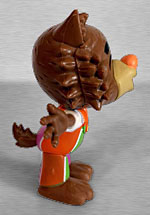 weren't going to want a cereal with a bog monster on the front. From the front, it looks like he's trying to kiss you: his eyes are closed, his mouth is puckered, and his arms are held wide because somebody wants a hug. Turn him to the side, and you'll see he's leaning into it! Clearly this is meant to be him howling, but they didn't want to tip the head all the way back, so he's bent forward slightly (with his tail sticking out behind to help the figure balance). The colors on his overalls represent all the various fruit flavors in the original cereal - the orange, the apple, the grape, the pomegranate, the quince, the kumquat, the kiwi, the plantain, the guava... wait, sorry, I'm thinking of Froot Loops.