When he was an infant, Buddy crawled into Santa Claus' sack 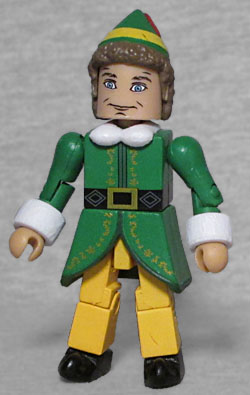 in the orphanage and stowed away to the North Pole. Buddy was raised by the elves unaware of his human parentage, and when he found out he set off on a journey to find his father.

In 2003, the idea of Will Ferrell being the lead star in a movie was unthinkable - and a family movie even less so. Sure he'd been a bright star on SNL, but he'd hardly be the first big fish to regret swimming out of his little pond. Plus, it was being directed by "the other guy from Swingers"? Recipe for disaster. Yet here we are, 16 years later, and it's already considered a Giftsmas classic. Buddy the Elf is wearing his familiar green coat and yellow tights, and has curly-toed shoes. Add-on pieces create his cuffs and collar, while the likeness beneath that curly hair and pointy hat is wonderful! There's no mistaking who this is meant to be. 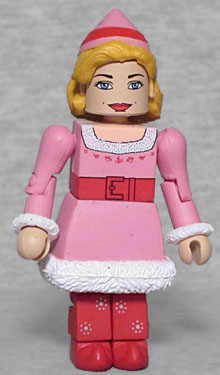 On the other hand, our next figure is nearly unrecognizable, because not only is Elf just about the only time Zooey Deschanel has not played a manic pixie dream girl, it's also one of the few times she's been blonde. Her character, Jovie, was raised in LA, where Christmas is surreal and super-phony, explaining why she was so unenthused about the holiday. Since she worked at Gimbles (the old Macy's competitor), she had to dress as an elf, but that was a different elf costume than this one - these are casual clothes, not work clothes. She's got a pink dress and red tights and shoes. The skirt is a large piece that flares away from the legs, and is sculpted with fur trim along the bottom, but the details on the top are just painted in order to keep the figure from getting too bulky. Again, her hair and hat are a single sculpted piece, and she has rings of fur at her wrists.

Like the Thundercats Minimates, this set includes a bonus that's not quite a full figure, but is definitely more than an accessory: it's Papa Elf, the man who raised Buddy! He was played by legendary comedian Bob Newhart, perhaps the last person you'd ever think likely to get an action figure.

And he still hasn't, because this figure has no action! It's sculpted with the Minimate style, but it's only half as tall as a normal 'mate and is entirely unarticulated. Nice caricature work, though. They might have chosen to make him sitting in his chair, since that's how we often see him in the movie (with Buddy on his lap). 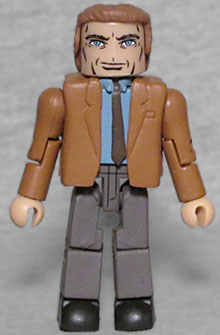 Back to the full-sized (2¼") figures, we have another guy who has no business being an action figure, James Caan. Nobody's clamoring to make a Sonny Corleone or Brian Song toy, you know? Fittingly, this is the most boring, straightforward figure in the set - it's just a guy wearing dress clothes and a brown jacket, which is pretty far afield from what the others look like. It works, though, because Walter was the straight man the other characters' comedy played off of. The Minimate does fairly resemble James Caan, but there's really nothing super exciting here. Well, I guess you could take advantage of Minimates' modular construction to remove the foot and make a Misery figure, so that's something.

Our last figure is 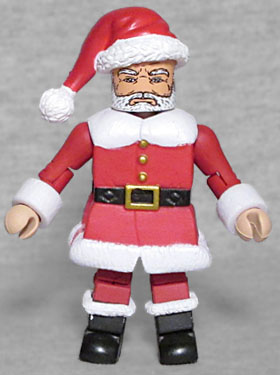 Yes, thank you Buddy. Santa. There have been Santa Minimates before, in the Nightmare Before Christmas line - both Jack in disguise and Santa himself. This is a really nice representation, with a new chest cap to create Santa's big coat, fur on the boots and sleeves, and a warm cap. Elf's Santa was played by Ed Asner, suggesting that it's in the same Cinematic Universe as all the other times he's played jolly old Saint Nick, including Olive the Other Reindeer, The Ellen Show, Regular Show, Christmas on the Bayou, and more. Even outside the other figures in the set, this is a really cool Santa Claus Minimate and a terrific little decoration.

If you wanted, you could make the case that Elf is an adaptation of Robert Heinlein's Stranger in a Strange Land - you've got a human baby, raised in an inhuman environment and inexplicably adapted to live in its alien conditions (just like Mike should never have been able to survive without water, Buddy should never have been able to survive on a diet of candy, candy canes, candy corn, and syrup) meeting normal humans, falling for the first girl he sees, and through his own wholesome works and patient friendliness realigning everyone's beliefs until they give themselves over to an ancient, powerful force for good. If we were designing this set, we'd probably have replaced Walter Hobbs with Miles Finch (because who wouldn't rather have a Peter Dinklage figure than a James Caan one?), but it's still super fun to get these!

This entry was posted in I Seem to Recognize Your Face, MMMR, videos and tagged Elf, Minimates. Bookmark the permalink.