Hailing from the first series of Transformers BotBots (and thus from the first wing of the mall), Goob Toob is a reminder of those halcyon days when there were only eight factions. The Techie Team lived in two stores even back then, with Goob Toob playing near the escalator on Level 2. 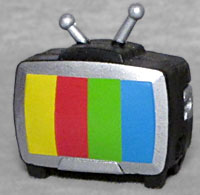 TVs used to be large, cumbersome affairs, with a literal glass tube that allowed the picture to be shown. That's why this TV is so thick, with four small feet on the bottom and a big bump in the back. They also used thin metal rods to receive transmissions directly out of the air, which is why there are those two silver things poking out the top. And when a station wasn't broadcasting content, it would often default not to a solid blue screen, but to a "test pattern," a signal used by engineers to check the calibration. The SMPTE color bars are trademarked, so this one just gets four thick stripes. 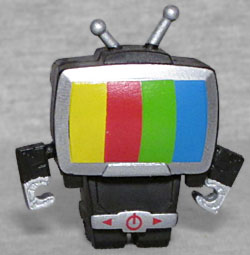 because he kills their brain cells. Right now, his screen isn't quite working right so he's stuck streaming a show called "Technical Difficulties," which is a show about four blocks of color that don't really do much. If anything's going to kill brain cells, it's a show like that.

Gooby is pretty straightforward: he's a robot with a TV for a head, like a more adorable Lord Canti. (Hey, there's your next repaint idea, Hasbro: paint this mold teal and put a pseudo-Atomsk symbol on the screen.) The body is black, while the hands and belt are silver, matching the frame around teh screen. The belt is decorated with a power symbol and left and right arrows, suggesting the television's controls. 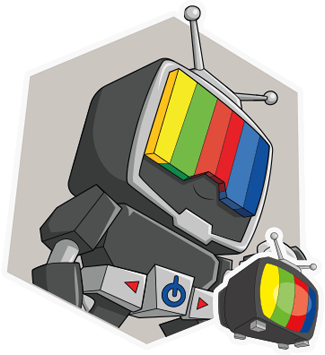 Goob Toob is available in two of the Series 1 8-packs: one Greaser Gang, and one Jock Squad. The mold was also used to create Series 2's blind-packed TV Cop and again in Series 3, but you'll have to continue to the next page to learn about that.