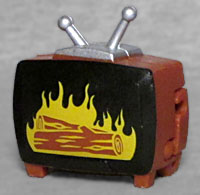 The idea of broadcasting an uninterrupted loop of a crackling fireplace began in 1966 at New York's WPIX Channel 11 - since so many New Yorkers lived in homes without a fireplace, the president of the channel felt that giving them a yule log would be a nice Christmas gift. The idea spread from there, and now there are lots of versions aired all over the place - and surely, you could buy your own to play at home whenever you want. Instead of the color bars the first iteration of this mold had, we now get a pair of brown logs engulfed in yellow fire, something cozy for these cold nights.

Yule B. Bored is an old bot who likes to tell stories that are 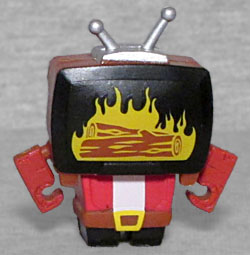 very (not) interesting. Most bots fall asleep before he's finished. They may not love his stories, but everyone loves curling up in front of the video he plays of the log crackling in a fireplace.

While Goob Tube was black and silver and TV cop wore a blue shirt, Yule B. Bored is dressed like Santa: a red jacket with a white band down the center of the cheat, a brown belt with a golden buckle, and shiny black boots. The only thing missing is a hat to go on top of the antennae. On all versions of this mold, if you turn t around and look inside the head, you'll see molded wire details, something that would not really be found on the inside of a picture tube this way. 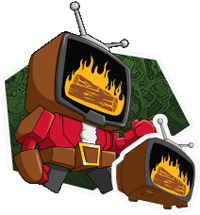 Yule B. Bored is available in two Seasons Greeters 5-packs (both of them with Sugar Breath, weirdly enough) and a Fresh Squeezes 8-pack.