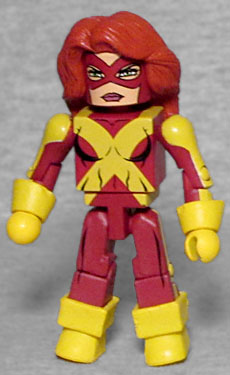 In the old box set, Jean was wearing her green costume. After the team was outed as mutants, she switched to one in red. Still kept the gigantic yellow X on the torso, though. Like Cyclops, she has glove flares and folded boots, and teh rest of her details are just painted on. In truth, the green version should have had the top of her head covered, because the free-flowing hair was introduced with his costume. It's an existing piece for this Minimate, but it still looks good. The stripes going down the outsides of the arms and legs were a new feature on this design, so if they'd been skipped here, it would have been blatantly wrong. 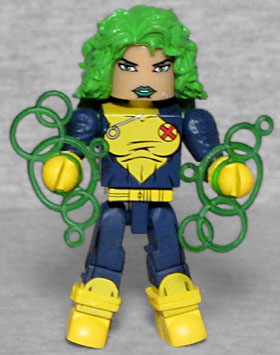 The Mistress of Magnetism, Lorna Dane is the daughter of the mutant Magneto, and occasionally battled the X-Men before joining X-Factor.

Only when she was mind-controlled, not on her own! This is the second Polaris Minimate, but it's got a very distinctive look. She's got cuffs around her wrists and ankles, giving some depth to her gloves and boots, and the use of the "poofy sleeve" arms is a smart way of creating her '90s costume (the belt and zippered chest panel are painted on). Her bright green hair is very curly, requiring a new mold. She gets the same energy effects as Havok, just done in a dark translucent green instead of yellow.

Series 78 is one of the ones that has a Build-A-Figure, so the set includes some pieces for that. The figure is Strong Guy, and the pieces are his arms.