How do you know when we've got too many Deadpool toys? When they start releasing joke figures into real stores.

Well, this pretty little number is a look I like to call, "Deadpool and chill."

You just heard that in Ryan Reynolds' voice, didn't you? If not, read it again until you do.

Above the waist, this Deadpool is this Deadpool - different pattern on his costume, but the same body and the same bracers/belt. Below the waist, he's 100% new. He's shed his pants, and is left wearing white boxers with pink Deadpool-emblem hearts printed on them. Therefore, we also see his bare (scarred) legs, at least down to the point where he's wearing fuzzy pink slippers and a single grey sock with a hole in the side. The slippers are not molded on, but are instead separate pieces glued in place, to better convey a realistic sense of depth. 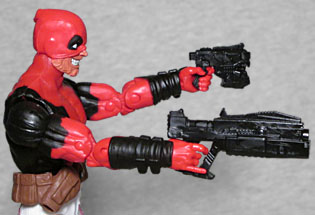 Wade's guns are the same ones that came with Domino, which explains why they look purple in the promo art on the back of the card, rather than the black they are here. It also means he has a holster and no gun that will fit inside it. Maybe it's a roundabout reference to that famous Steranko "holster" issue of Nick Fury.

The head is also new, and thanks to the re-use of bodies, you'll be able to trade it with any of the other Deadpools. This one has his mask pulled up above nose-level, showing off his prize-winning smile. And of course, one eye is bigger than the other, because that's how he works. The (molded) red on his mask and arms doesn't match the (painted) red on his torso very well, sadly.

"Casual" Deadpool comes with the head and torso of this series' Build-A-Figure, Sauron. It's surprising he could get such a big piece, as well as new molds for his legs. The insert behind the figure in the tray is pink, with more Deadpool-hearts all over it, and the toy itself is posed in a "kicked back and relaxing" pose that makes it look like he and Sauron's torso are basking in a post-coital afterglow.

This is a silly figure, but Hasbro put more work into it than any sane group of people would ever dream of doing. How appropriate!