Back in the day, the Lost Bots were scattered all over the Transformers BotBots mall. For instance, if you look at the first wing of the mall, you'll find this little misfit down on the ground near the fountain.

Once upon a time (in 2016) the Transformers' official Facebook page 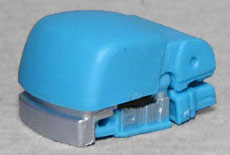 introduced two new factions: the Memobots and the Deskcepticons, "Office Bots" who changed into office supplies. It was just an April Fools' Day gag, but one of the Deskcepticons was "Stapletron," a Transformer who changed into a stapler. Who would have believed that only two years later, the concept would become reality thanks to the BotBots? This bright blue stapler is much wider than a real thing would be (unless it's meant to be at 1:1 scale and would only hold about five staples inside it), but the idea remains intact.

BotBots convert very easily. All you have to do here is unfold the legs, and swing the arms down and to the sides.

Stinkeye Stapleton is a tough-as-nails peacekeeper who likes 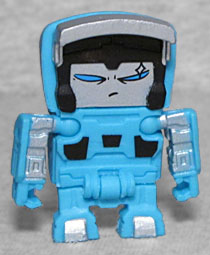 to hold things together and make sure everyone gets along. Don't get on his bad side or he'll give you the dreaded look: the stink eye!

Stinkeye Stapleton has a very cute robot mode. He's broad and squarish, with a black "helmet" around his silver face. His arms and feet are silver, while the majority of his body is the same blue as the altmode, duh. A few black elements break up the body, and there are a sculpted elements to keep him from looking boring. The narrowed eyes and small mouth make him look angry and frustrated - an emotion furthered by the anime-style flare above the left eye. The only articulation here are the balljointed shoulders. 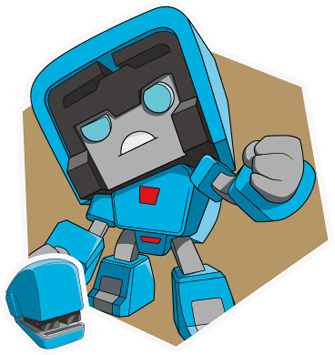 Stinkeye Stapleton is available in a Toilet Troop 5-pack, a Greaser Gang 8-pack, or a Jock Squad 8-pack. If you're trying to get a full collection of Series 1 figures, you'll probably end up with at least two of him.