Condoms are very cheap and incredibly effective, yet people who have better things to spend their money on still inexplicably opt to grow children. Hey, to each their own. If not for those weirdos, baby stores like the ones where the Goo Goo Groupies live would go out of business. Since Transformers BotBots is not a crossover with Children of Men, you'll find High Roller on the second floor with Nanny McBag (suggesting the latter's classification as one of the Lost Bots was a late choice).

Being smart is a burden. Look at most creatures in nature, and you'll see their young are mostly able to take care of themselves soon after birth. Because of the relative 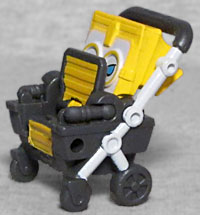 hugeness of our brains, humans' heads need to be gigantic; that means we need to be born way before we're finished developing. A horse is up and moving within an hour of birth, but a human? It'll take at least a year. Since people frown on you leaving them in your car (even if the air conditioning is on and they have water), you need a stroller to move them around. This one has all the important parts - wheels, a seat, a handle, a retractable cover for shade - though the flap that's supposed to hide the robot's face in this mode is a little too small to do its job. The yellow-and-grey colorscheme makes it look like this kid's parents were fans of Bumblebee.

It's easy to convert BotBots. Tip the bonnet and handlebar back, fold out the legs, cover the resulting gap with that flap we mentined before, and get the arms out to the sides.

High Roller is the best baby carrier on wheels. Her integrated GPS ensures she never gets lost. Her wheels feature automatic terrain stabilization 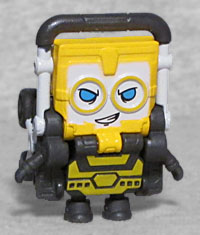 for a smooth ride. And, the cockpit contains a multi-point airbag system for maximum safety.

You know you can just put some wheels and a string on an orange crate, right? You're never going to be able to afford HasLab's Razor Crest if you're wasting all this money on stuff you're only going to use for three years at most. With her very square head and molded glasses (goggles?), High Roller feels reminiscent of Inky Inkerson and everyone else who uses that mold. The angled eyes and slight smirk make her look snarky. There are sculpted details on the chest flap, so the body details will be mostly the same every time Hasbro reuses this mold. Despite the small feet and the kibble on her back, High Roller stands decently. And her tiny arms are on balljoints! 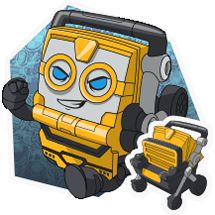 High Roller is available in a Season's Greeters 5-pack, or a Goo Goo Groupies 8-pack.