Mattel's really going all out on the Masters of the Universe: Revelation 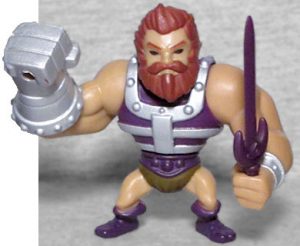 tie-ins: not only are there normal action figures, they've also done a set of Eternia Minis based on the show. There are five figures in the first series (four characters and one variant), and while four of them are based on the new designs, there's one that could easily be from the retro line: the heroic master of hand-to-hand combat, Fisto. This is his classic look, with the purple and silver armor, the furry boots, and the humongous iron fist. He's armed with a purple sword, which will be great if they ever do a Tri-Klops, and his head has the full beard and combed-back hair that make him look like an elder Millennial. 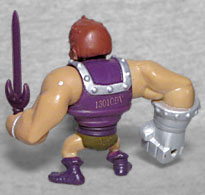 Unlike his opposite number, Jitsu, Fisto has no trouble balancing despite his giant hand. He's got the same articulation as all the rest of the figures - neck, shoulders, and waist - but you can have his arm hanging wherever you want with no worries. The back of his armor gets only minimal paint, to outline the collar, leaving the rest blank. I don't know about you, but I never thought of him as wearing purple armor with silver trime; I thought it was silver armor with purple. Guess not! The armor is sculpted, so customizing it would be easy.