GI Joe gets even worse

Who is in charge of the GI Joe brand at Hasbro right now, and why do they keep going in the wrong damn direction?

Last week yo complained about how the new Classified Series figures are just copying the 1980s designs instead of doing anything good, and now they've announced this foolishness: 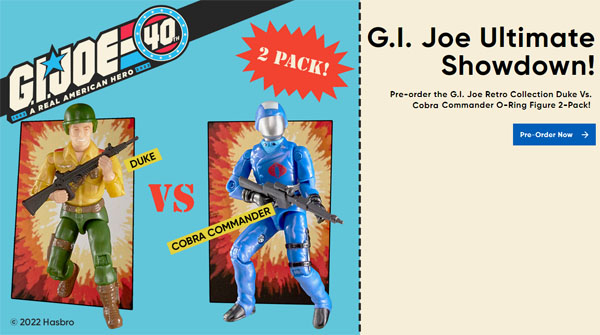 First of all, should we be insulted they're basically using our colors to advertise this $42 travesty? Secondly, while we understand the desire to do a pair of retro figures to honor the 40th anniversary of the Real American Hero line, neither of these figures were available in 1982: they were both '83 introductions. You can tell, because in 1982 none of the figures had swivels in the biceps.

And what is with the recent fascination with the O-ring bodies? We can at least somewhat excuse it for this set (keeping in mind the bit about neither of them being from the year that's being honored), but those otherwise-interesting GI Joe/TF crossover figures are also saddled with old throwbacks instead of superior Generation 3 molds, meaning what could have been 10/10 offerings are, like, a 6/10 at best. Why does the brand keep moving the wrong way?

Let Super7 be in charge of the inferior old-fashioned figures, Hasbro. You head forward instead of backward.