This is the latest in a series (of indefinite length and regularity) of blog posts memorializing cancelled toys. Our subject today is ToyBiz's Marvel Legends Series 13.

We're not saying ML13 was never released - Onslaught is today's review, after all - but there were plans for more than we got. 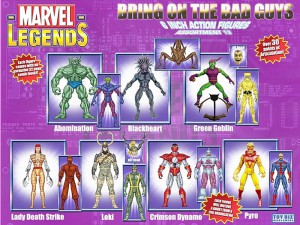 At one point, the plan was to give us seven figures, but no BAF. I'm not sure when Crimson Dynamo looked like that - maybe that's why ToyBiz dropped him. But as you can see, each of the figures would also have come with a pack-in figure featuring one of the many nameless, faceless mooks who work for the various evil organizations of the Marvel universe:

At this year's SDCC, ToyBiz showed off some of the figures (minus the two aliens), but the odds of them ever being released are slim.