In today's new review, yo gave you a little bit of information on the origin of the universe's coolest (not-a-)Green Lantern, Rot Lop Fan. But nothing compares to the real thing, so here, from 1987's Tales of the Green Lantern Corps Annual #3, is the Alan Moore-penned "In Blackest Night." 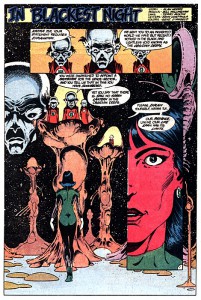 Notice all the stars in the background of that image - they're nothing special, but they'll be important later. 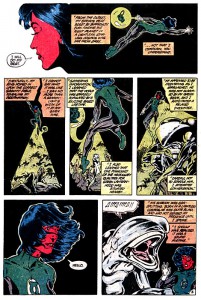 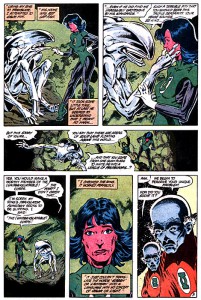 Now the backgrounds are all solid black - it's not because she's in a cave or something, that's just how the sky looks. There really is no light in this part of the galaxy. That's why so many stars were shown on the first page, to draw attention to the differences, but it's still easy to overlook. 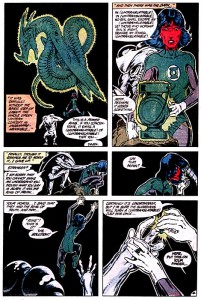 You can guess what most of the (untranslatable) words are, even when they're not in the GL oath: "beam," "light," and "blind eye." 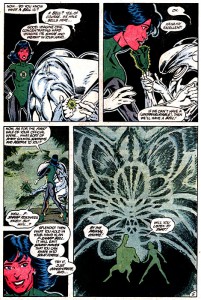 It's interesting that Katma Tui asks him what tone is restful and soothing. Is that how she thinks of the color green, as well? Humans find green restful and soothing because we evolved that way, but she's an alien - what are the odds she'd view it in the same light (no pun intended)? 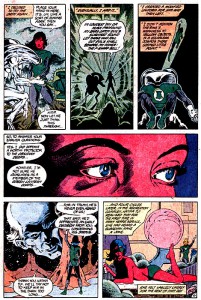 Not telling him about yellow makes sense, from a practical point of view, but it does raise some questions: in a pitch-black setting, such as Rot's home planet, it wouldn't be an issue, because with no light present "yellow" wouldn't exist; but his ring does create light - the constructs are still made of light, even if he can't understand what that means. For evidence, look at the shadows cast when he recites his oath. So if something was yellow, his ring would illuminate it, right? Well, not necessarily: the things we see as yellow are only that color because they're reflecting the yellow wavelengths of white light. There are no yellow wavelengths in the green light created by a GL ring, so anything yellow would simply appear green. Science!

This entry was posted in addendums, comics, DC, Mattel and tagged Green Lantern. Bookmark the permalink.