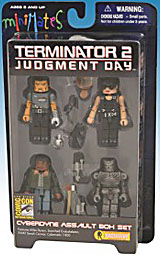 Here's a first: we've never done one of these quickie blog reviews on a con exclusive before.

Planning a covert assault on an advanced multi-national corporation is difficult, but infiltrating and destroying Cyberdyne Systems Corporation's headquarters while evading a homicidal T-1000 unit is near impossible... unless you're Sarah Connor. Featuring the exclusive Miles Dyson, Scorched Endoskeleton, SWAT Sarah Connor and Cybernetic T-800, this Cyberdyne Assault Minimates Box Set contains everything you need to stop Skynet and Fight the Future! 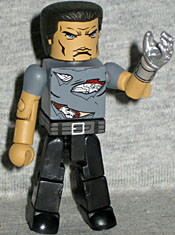 This set was a 2009 SDCC exclusive, which gives you an idea of how far behind on Minimate reviews we are, and why we're burning through them this way. And although the set is called "Cyberdyne Assault," there's really only one figure that fits that description. For example, the Cybernetic T-800 looks like he's taken from the raid on Miles Dyson's house, not on Cyberdyne. He's wearing his grey T-shirt without a jacket, and he's cut the synthetic skin from his left arm to reveal the metal beneath. The battle damage on his shirt isn't anything seen in the film, but it does add some spice to the figure. His metal bits are painted silver, and you have your choice of a complicated Endoskeleton hand or a plain Minimate hand. 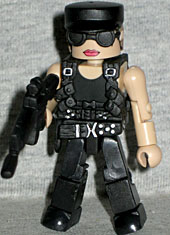 SWAT Sarah Connor is taken from a scene even earlier in the film. Yes, this is the black tactical gear she wore to Miles Dyson's house, but she got there at night: the sunglasses she only had in the desert when she was still gearing up. On this figure, they're a molded part of her hat, as is her hair - it's pulled back in a ponytail. She has separate webgear and a belt with a knife molded on the right hip. Both pieces also have silver paint apps to create the buckles and snaps, but that's it. She comes with an AR-15 rifle to shoot at Miles, but not the pistol she switched to once inside.

Sarah also comes with a second piece of hair, still pulled back in a ponytail, but now without the hat and sunglasses. With this one on, you can really appreciate the Linda Hamilton likeness. She looks angry and murderous, but you can still instantly tell who it's supposed to be, which is the #1 sign of a good caricature. 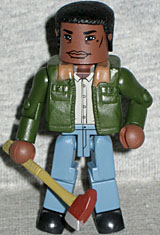 Now we get to the one figure in this set that actually qualifies as assaulting Cyberdyne, Miles Dyson. This is unmistakably the outfit he was wearing when he took his "friends from out of town" to see where he works: blue jeans, a button-up shirt and a green jacket. The likeness of Joe Morton is decent, and he has new hair. If you remove his jacket, you'll find the bandaged wound on his left shoulder, from where Sarah shot him. He comes with an axe (later reused for the MAX firemen), which only shows up in a deleted scene in the film, when he chops up the prototype neural processor. Obscure! 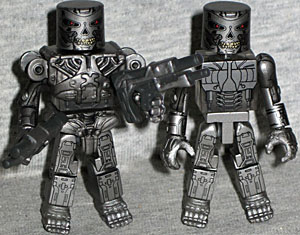 The final figure has absolutely nothing to do with the theme of the set. It's a Scorched Endoskeleton, which may make sense in the future, but is completely out of place in 1994. It's the same figure as the plain Endoskeleton, complete with the skinnier body under the armor; it's just painted a darker color. It also comes with two of the plasma rifles, so you can have it dual-wield. Still, why is it in this set?

Considering the bad distribution of the Terminator 2 Minimates, this set may have been the only time you saw Sarah Connor - and it's definitely the only way to get Miles Dyson. The Endo is a weird choice, and the T-800 may not be screen-accurate, but at least he's cool. Still, I probably could have done without this SDCC exclusive.