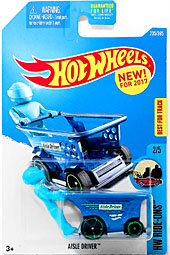 Well, huh. If this is #2 of 5, then I was wrong about Let's Go having that number, and presumably I haven't missed #4. Good to know!

Born: 2017
Birthplace: El Segundo
Designer: Hot Wheels
Specialty: This souped-up, crazy cart racer is ready to roll into the supermarket showdown. Load one or more figures and get ready for basket-case stunts in an aisle-by-aisle race-off. Will Aisle Driver win before it's time to check out?

Yes, it really does say "souped" up, not "suped" up - it's a food pun, because the Aisle Driver is designed to look like a shopping cart. 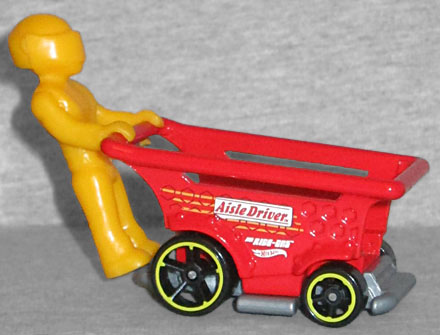 Of course, it's far from the standard trolley you'd find at your local supermarket, what with the oversized racing wheels, large in the back and smaller in the front, and the curving fenders above them. Plus a giant bumper all the way around. Also, it would just be the worst at holding your items, since both the front and back are completely open, with no walls to keep things inside. The outsides and interior bottom are molded with an in-set honeycomb pattern meant to suggest the shape of a real cart. 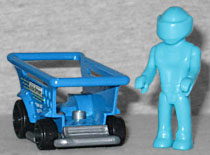 Since the Aisle Driver is part of the "Ride-Ons" series (a new mold for this year), it's designed to interact with Lego minifigures. And also Mega Bloks, but who's got those? However, this is the first release to actually include a figure of its own! It's a single unarticulated chunk of plastic, showing a man wearing a helmet, but his hands are sized to hold the appropriate bits of the sculpt. Yes, it would have been loads and loads better if there was articulation, even just pass-through swivels that made both arms and both legs move in unison, but we'll take what we can get.

The attempt at co-functionality does an amazing job of 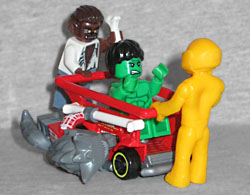 underscoring just how difficult it is to do what Lego makes look easy. Okay, I realize that sentence is a little confusing, but consider: one of the attachment points is a pair of studs on the floor of the cart. Okay, that's great, right? Well, it would be, except that the wheel wells inside are set too close to the studs, so there isn't enough room for a minifig foot to fit on there. Sitting or standing! The figures can at least hold onto the upper rim, or the bumpers, but missing out on the interior usefulness is disappointing.

The Aisle Driver is available in two colors: first it came in red with a yellow 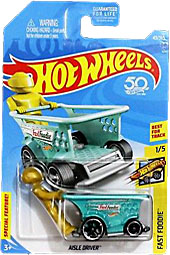 rider, then later in tones of blue. Just like Transformers, I'm only interested in one version of any given mold, so I had to pick which one I wanted; the red made me think of Target's shopping carts, so I went for that one - or did I? Can you tell which version in these pictures has been Photoshopped to look like the other one?

(Edited to add: at the end of the year, a third version was released, featuring a metallic teal cart and a golden driver, as #1 of 5 in the 2018 "Fast Foodie" subset. So now we've got Target, Walmart and TRU's cart colors covered? I may have to get some more Aisle Drivers after all.)