For their first set of Hot Wheels Character Cars in 2021, Mattel has gone back four decades, bringing their push to reinvigorate Masters of the Universe to the car aisle. 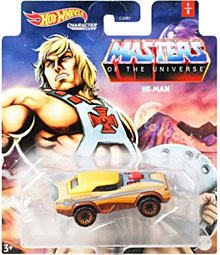 Prince Adam uses the Sword of Power to transform into He-Man - the most powerful man in the universe.

Shouldn't that be "the most powerful car in the universe"? Because this is not a man. It would be extra funny to imagine Human Prince Adam holding aloft his magic sword and saying "by the power of Grayskull," only to be morphed into the form of a car like Turbo Teen. That would certainly explain why no one can ever recognize him! In the '80s, Adam was the same size as He-Man; in the '00s, he was much smaller; in the '20s, he's a human instead of a vehicle. It's the perfect disguise! 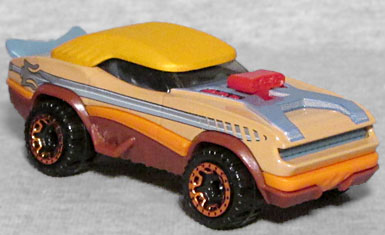 a muscle car. Oh, come on! That joke is just way too perfect! The car was designed (in May of 2019, according to the signed concept art) by Charlie Angulo, a guy who clearly understands the importance of a good pun. The car has a blocky front end, like a Ford Mustang, and chunky off-road tires with shiny copper rims. Most of the car is metal, but you may not notice, because the roof and rear spoiler, the places you're likely to touch it when you pick it up, are plastic.

The He-Man-inization is great. The upper body of the car is tan, because He-Man is

shirtless, and the yellow roof is in exactly the shape of his pageboy haircut. Love it! A grey piece on the hood stands in for He-Man's harness, with the big red air intake as the cross in the center. An orange stripe around the middle of the car is meant to be He-Man's belt, and then beneath that it's brown, with ridges to suggest the fur of his underwear. The weakest part of the whole design is the Power Sword, which is just painted in silver along both sides. Was there really no better way to do that?