Today, it's back into the world of survival horror. 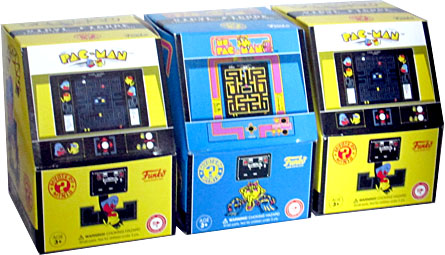 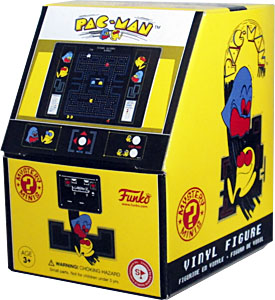 Pac-Man was not created to be a videogame. As explained by designer Iwatani Toru, "I don't have any particular interest in [computers]. I'm interested in creating images that communicate with people. A computer is not the only medium that uses images; I could use the movies or television or any other visual medium. It just so happens I use the computer." Basically, he wanted to make art, and that was just the medium he had. Pac-Man was one of the first games to have a creative team behind it, not just a single programmer - engineers, graphic designers, composers... having those jobs as part of the games industry today can be traced back to Pac-Man. 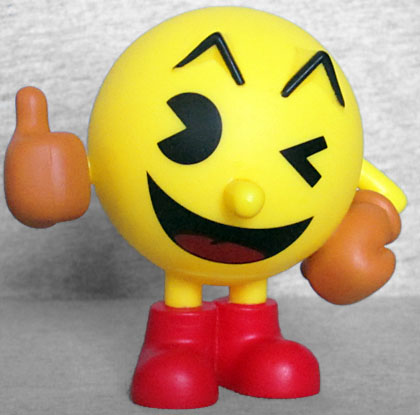 Pac-Man was originally just a circle with a mouth - in fact, the original Japanese cabinet art for Puckman portrayed him as a yellow ball with a pink mouth and green feet in rollerskates. Iwatani has said that while designing the game, they considered giving Pac eyes, but "once we added eyes, we would want to add glasses and maybe a mustache. There would just be no end to it." A sphere with a chunk taken out of it wouldn't make for a very interesting Mystery Mini, however, so Funko opted instead for something more complex. 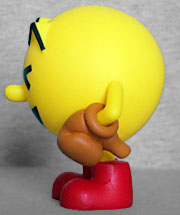 Inspired by Pac-Man's 25th Anniversary logo (rather than the '80s art seen on the box), this figure sees Pac standing with one orange-gloved hand on his... "hip" may be too strong a word, but near the area where his leg enters his body. He's giving a thumbs-up, and winking at the viewer. His eyebrows are molded, and he has a long, upturned nose, but his eyes and mouth are just painted on. He wears two red boots, though they're molded here as a single piece. The size still seems surprisingly large, closer to the "Really Big Mystery Minis" than the normal ones.