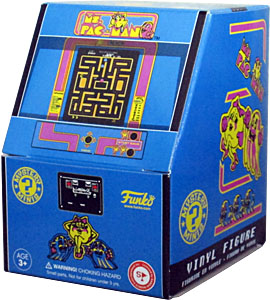 Since Ms. Pac-Man was designed as an add-on kit (proving that "third party" existed long before Transformers), every Ms. Pac-Man arcade cabinet was really a Pac-Man machine with an extra set of computer chips plugged in. The cabinet (and thus the boxes for these Mystery Minis) was blue with pink and yellow art. Ms. Pac-Man's mazes weren't the same as the original game's, and there was more than one layout. Plus, since the game could handle six moving objects at once, the bonus fruits bounced around the screen rather than sitting in one spot. And finally, since "Crazy Otto's" creators were originally trying to avoid infringing on Namco's trademarks at all, the game even has its own original sound effects.

Though this figure is identified on the back of the box as "Ms. Pac-Man Ghost," it's clearly Pinky. The orange ghost was known as 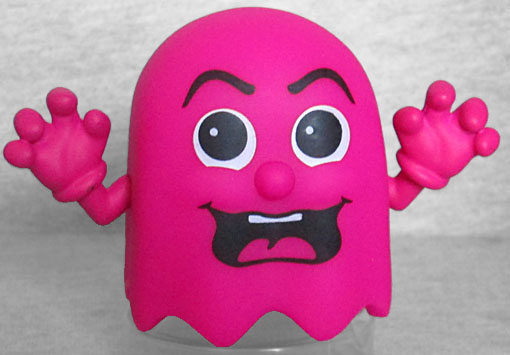 Clyde in the original game and as Sue in the sequel, but Pinky is always Pinky. Except when he's (she's?) "Speedy," or Machibuse ("Ambusher"). That name comes from the original's AI directive, which was to always head for a spot four dots in front of Pac-Man's current facing. Ms. Pac-Man changed the ghost behavior so it wasn't as predictable, because that would increase the chances of a player dying and having to insert a new quarter.

Pinky has the same pose as Blinky, but it's not the same mold: 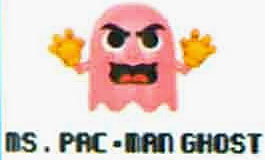 this one has no wrinkles, and gets a button nose. The hands are now the same color as the sheet, and the style of the face is entirely different - more ornate. Pinky's mouth is open, showing a tongue and some teeth along the top, and the big cartoony eyes rest under arched eyebrows. The image on the back of the box depicts Pinky with angry eyebrows instead. And also a lighter shade of pink, rather than this vibrant magenta. It's a shame the ghosts don't have any kind of clear stand to make them hover, so they have to permanently sit on the ground.