Most of the Transformers BotBots are divided into themed groups, but then there are those who get separated from the herd and turn up in the Lost & Found as Lost Bots. They don't get their own store, and can instead be found all over the mall - Burgertron, for example, is right by the escalators on Level 2.

If he weren't one of the Lost Bots, Burgertron would clearly have been 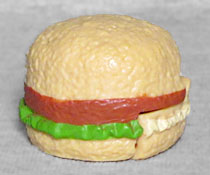 part of the Greaser Gang - like Spud Muffin, he feels like a throwback to the McDonald's Changeables, being a nice-looking hamburger. Greasiness is the right of all hungry beings. The bun has a rough, pitted texture, which looks more like the inside of an English muffin than a sesame seed bun. The paint has some problems, too: the brown of the patty stops where it gets to (what will eventually be) the robot's arms, and the green lettuce turns yellow at the same spot. What the heck happened there? Was it by design, or a production error?

BotBots convert very easily, for more kid-friendly fun. All you have to do here is unfold the legs and arms, and you're done. 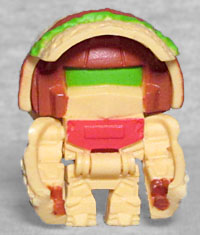 and always good for a cheesy line at just the right time. Hasta la beefsta, BotBots.

That's super cute. Burgertron looks a lot like Optimus Prime, with the mouthplate, the forehead ridge, and the ear antennae. The art shows the mouth silver, but on the toy it's unpainted yellow, the color the entire thing was molded in. He's got a red patch on his chest, green eyes, and brown hands that match his helmet. You might have trouble standing him, thanks to his big buns: the top of the burger takes up the entire back of his head, so he wants to fall right off his tiny little legs unless you swivel his arms forward slightly to help balance him. 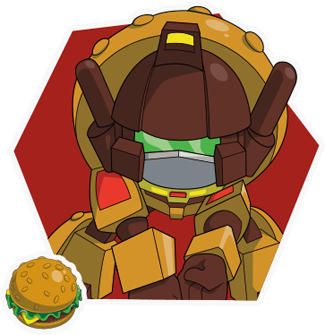 Fitting with their "misplaced" status, the Lost Bots are only available in the blind-pack portion of the line, either single-carded or in the hidden spot in the multipacks. Burgertron is available in two Series 1 five-packs, and one eight-pack.