Union Jack is a British operative, spy, and master of hand-to-hand combat embroiled in the world of European politics.

This is Hasbro's second attempt at making a Union Jack - the first, a Target exclusive, was more than a decade ago, so there's definitely room for improvement. For example: the 2008 figure was made by recycling a standard body; so's this one, but today's standards are higher. The same goes for the paint, in fact: the red used for the big design on the center of Union Jack's costume (there must be some kind of name for that thing, right?) is brighter and more vibrant than before, and the St. Andrew's and St. Patrick's crosses have the proper offset this time, rather than just looking like white outlines around a red diagonal.

The head was made new for Union Jack,

but there's nothing saying it couldn't be used again for later figures - glue a pair of Jubilee's glasses on, stick it on a white version of the suit body, and you've got yourself The Rose! There are sculpted seams around the exposed eyes and running back over the top of the head, wrinkles at the base of the neck, and small bumps where the cloth goes over his ears. This is very nice sculpting work. 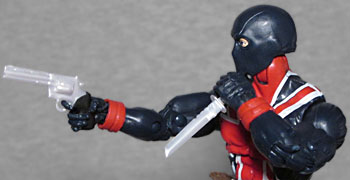 The straps around the ankles and wrists come from Deadpool, but the utility belt is new. Being a simple guy, Union Jack is armed with a knife and a revolver. Getting the flap on the holster to close can be tough - I had the most luck closing it while empty, then sliding the gun in after.

He also includes the right arm of the new Hulk Build-A-Figure.

This figure is an example of Hasbro fixing their own mistakes, taking old so-so figures and delivering better versions. And we'll be back here again in a few weeks when we review the new Guardian.