The appeal behind pumpkin spice everything came about because of the 2008 economic crash: when times are tough, people want comfort food, things that will make them feel better; 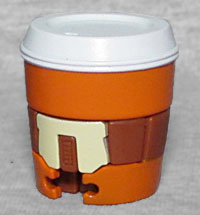 pumpkin spice's blend of cinnamon, nutmeg, ginger, and allspice (there's no pumpkin in it) brings to mind simpler times, like the pumpkin pie you ate as a kid at Thanksgiving; once the economy got good again, people started looking for new, fancier ways to integrate the flavor they'd rediscovered into their diet. (Nor is it any shock that as things returned to bad, there was a rise in the popularity of "maple pecan" everything.) There isn't anything that directly proclaims this to be a pumpkin spice drink, but the cup is orange and brown, so isn't that enough? It's either pumpkin spice or 1970s fast food, and I don't think they had sippy lids like this one back then.

BotBots are easy to convert by design, being small simple toys. Although they share no tooling at all, the engineering here is pretty much the same as Sippy Slurps: lift the top to reveal the face, spread the arms, and lower the legs. They're so similar, in fact, I thought I already had this mold somewhere. 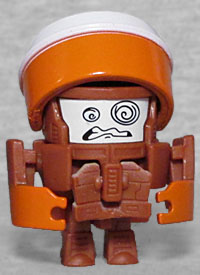 Latte Spice Whirl is the "it" bot of the juice bar. Loved by (almost) all bots, she can't go anywhere without being surrounded by fans begging for selfies. No wonder she only comes around once a year - what latte could handle the pressure of so much fame?

See, now that hints at pumpkin spice... and also the Spice Girls, for some reason? LSW would be fairly back-heavy, if not for the good design work that has her legs near the back of her body, meaning the center of gravity is right above them. I can't tell whether the flaps on the ends of the arms are supposed to be hands or if they're just kibble, but either way, they don't look terrific. Her face seems to be mostly recycled from Bankshot. 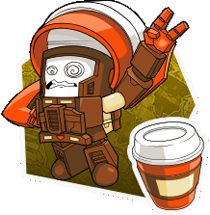 The backlash against pumpkin spice is driven by society's need to tear down anything women enjoy - pumpkin spice is for girls, bacon is for boys, so we mock one and celebrate the other. Because nothing says "I'm a serious person with serious opinions" like having the time and attention to get mad at a flavor. Love her or hate her, this Latte Spice Whirl is available in a "Seasons Greeters" 5-pack, or blindpacked as #22.