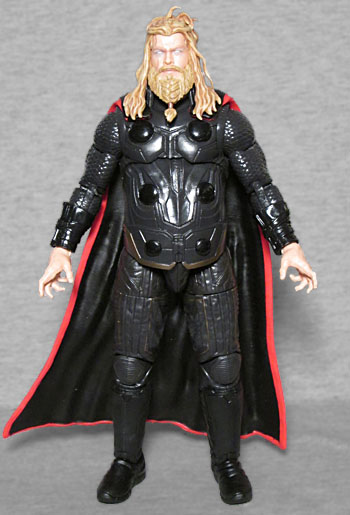 Last year on Singles Day, I bought SH Figuarts Warrior Thor because it didn't seem Hasbro had any plans of making one. Then, only a few months after I reviewed it, there came Hasbro with the news of their Infinity Saga line. Great timing, jerks!

Armed with Stormbreaker and Mjolnir, the son of Odin steps onto the battlefield to face Thanos one final time.

Thor's confidently rocking his big chubby body, which is mostly a new mold - the arms are the same seen on Infinity War Thor (though mine has two right forearms), with the armor being painted black instead of silver. The discs on the front of the shirt are gloss black, while the rest of the suit is matte, and there's a dark gold trim along the lower edge. 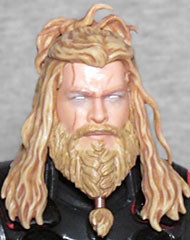 The head is better than the Figuarts release, with a truer likeness and shaggier hair. The eyes on this one are electric blue, and they've remembered to paint his scar. Plus, SHF seemed to take the idea that Thor has "golden" hair a little too literally - like, yeah, he's blonde, but that toy's hair was weirdly shiny, so it never looked right. On the other hand, that one did have articulated hair, which is a little bit beyond the design directive for a Hasbro figure. In other words, you'll have to be fine with this one's neck being a little less than fully useful. 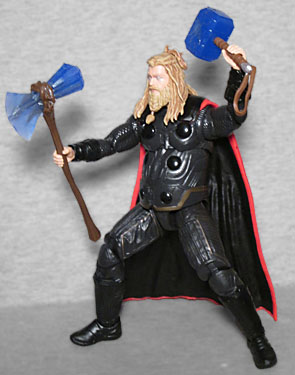 The articulation is normal for Marvel Legends, though he's one of the figures who gets a balljointed chest instead of separate chest and waist joints. In addition to the gripping hands he has in the package, there's also a pair open, gesturing as he summons his weapons. Both Mjolnir and Stormbreaker are the existing molds, but they're done in new ways: the heads on both are cast in translucent blue, with airbrushing and sliver lightning painted on them to suggest they're powered up. The set also includes two of the lightning effects that go on Stormbreaker; there's probably some cool way to put one of them on Mjolnir, though.

If I'd known this figure was coming, there's no way I'd have spent money on the Figuarts Thor, but by giving this one blue eyes, blue weapons, and blue lightning, Hasbro's unintentionally managed to create something different enough that you might want both in your collection.