On the failure of Skeleton Warriors

In today's review of Skeleton Warriors Aracula, yo briefly mentioned that the line floundered at retail and was ultimately unsuccessful. But why? 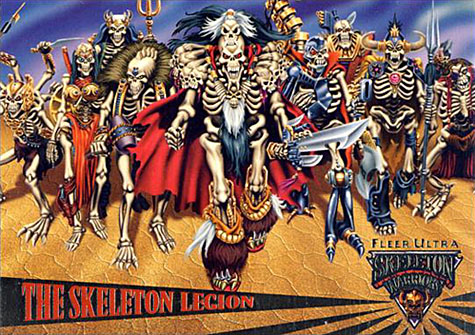 Skeleton Warriors debuted in 1994, to much acclaim. An article in the Chicago Tribune explained that tv executives were expecting it to be the next giant success (though the fact that the article also compares those expectations to the previous year's disappointing Biker Mice From Mars should have perhaps given everyone a clue of where things were headed).

The property was created by Gary Goddard, who also created Captain Power and the Soldiers of the Future in the late '80s. He was inspired by a book he was reading to his godson: every time a skeleton appeared in the book, the boy would exclaim "Monster! Monster!" He knew that skeletons are iconic images, and that we fundamentally recognize them as something evil. He went to Playmates to develop the line before approaching CBS to pitch the cartoon: he even lined up an animation company ahead of time, so he'd have footage to show the network, as well. The show got a prime 8:30 timeslot on Saturday mornings, right between Aladdin and WildCATS. Industry magazine Action Figure News & Toy Review praised the figures shown at Toy Fair, calling it "one of the hottest properties coming down the pike for the Fall of '94." So what went wrong?

Playmates front-loaded the line with the villains, which seems like a logical choice: not only do they look cooler than the heroes, but this was also only the second cartoon ever named after the bad guys (after The Inhumanoids), so shipping them first just makes sense, right? Well, it does, but nobody considered that moms might be reluctant to buy their kids toys that seemed to be all skeletons, all the time - the heroes didn't ship until later in the year, and many places had already moved the line to clearance. Skeleton toys, skeleton graphics... you might as well have just said "here, buy your child $7 worth of evil." Parents may have been concerned about the level of violence in Power Rangers, but at least the toys were brightly colored and not reminiscent of death.

The cartoon, which was darker than the average fare at the time, might have appealed to an older audience - an audience that would not in any way have been awake by 8:30 on a Saturday morning. They might have set their VCRs (yes, we had DVRs way back in those dark times, you young whippersnappers!), but the cartoon was bounced all over the schedule, and part of the reason that it never found an audience is that its audience could never find it. 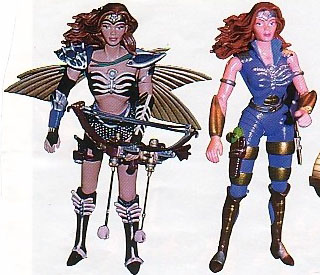 It seems that Skeleton Warriors was just a property ahead of its own time. If it had come out today, it probably would have been a hit, but in 1994 the pump had not been properly primed. Season 2 of the cartoon was cancelled, and so was Series 2 of the toys. Unfortunately, that meant we never got a toy of Talyn, the token girl on the heroes' team: she was meant to be in Series 1, but was pushed back for retooling and thus never came to be. It's like having a Fantastic Four line without the Invisible Woman.

Series 2 would have re-released the existing villains in brighter colors, to compete with MMPR. Other cancelled figures include Bonezai, the samurai; Claw, a wolfman; Sting, who was a scorpion in the same way that Aracula was a spider; and some kind of unnamed viking. Plus, look at this awesome dragon: 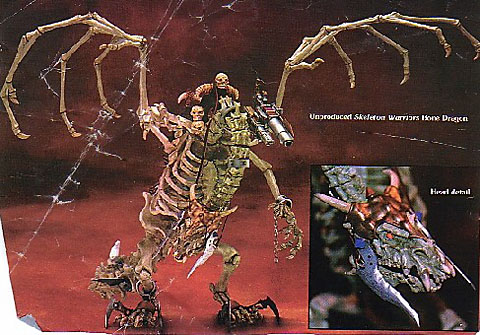 Skeleton Warriors had a lot of potential, but it fell short. What could have been the next He-Man or TMNT instead became an interesting footnote. Even with the coolest ideas and the best market research, predicting what kids will actually like is still just a guessing game; but maybe in a few years Playmates can give a reboot a chance, like Mattel has just done with the Masters of the Universe.

1 Response to On the failure of Skeleton Warriors