In today's Sentry review, you learned about how the legend of the character's creation was slightly... false. But that's not the whole story.

The official version is that Paul Jenkins created the Sentry, then convinced Marvel to pretend it had been created by Stan Lee and Artie Rosen (a name made up to reference real-life Atlas/Timely/Marvel letterers Artie Simek and Sam Rosen). But the truth is that Jenkins had been working on the pitch with Rick Veitch (Brat Pack, The Maximortal), using an idea he'd been mulling over since the '80s: an over-the-hill guy, struggling with addiction problems that were a manifestation of his own subconscious mind. Jenkins had tried pitching it to the horror anthology Taboo, for instance, but had no luck. However, in the late '90s Marvel was teetering on the brink of bankruptcy, and thus willing to try more experimental comics. Jenkins and Veitch sat down to work on their story, coming up with a character called the "Centurion" (eventually pared down to just "Sentry"). It was Veitch who suggested the "he was active all along, and everybody just forgot him" thing that's Sentry's main gimmick even today, and even drew up some versions of the character as he would have appeared in various eras: 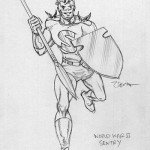 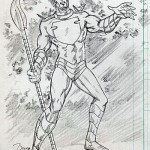 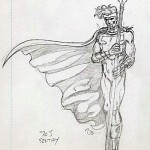 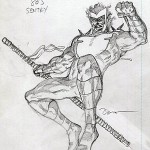 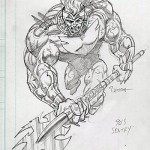 Everything was going perfectly until Paul Jenkins went to pitch the story to Joe Quesada. During the meeting, it was decided that rather than use Rick Veitch, the book would be done with Jae Lee (Jenkins and Lee had just done the Inhumans miniseries to huge acclaim, so it's not like there was no logic behind the switch). Veitch, for his part, seems very gracious about the whole thing, even though he got screwed out of something that was at least 50% his creation.

This entry was posted in addendums, Marvel and tagged Marvel Legends. Bookmark the permalink.