I became a fan of the Evil Dead films around age 15, when the films were so obscure my parents had to buy used tapes from a Canadian video store to get me them for Christmas. By the time I got to college, the films had already gone from cult to legendary status, and by the time I'd graduated from college, there were not only a half-dozen different special DVD editions of the three films, but action figures, comics, and a videogame. 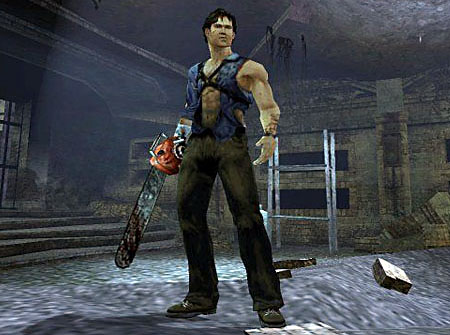 To be fair, there was actually a videogame even before Evil Dead 2; there was a 1984 Evil Dead game made for the Commodore 64. But the first post-ED boom game was Evil Dead: Hail to the King, released for the Playstation in 2000. It was a survival horror game a la Resident Evil, which probably wasn’t the best genre for a game based on Evil Dead 2 or Army of Darkness. The game tanked, despite a decent ad campaign featuring Bruce Campbell. The next attempt, in 2003, was a rip-off of the game State of Emergency, and the game was little more than running around killing monsters.

I never actually played either of those games. I played a little of Hail to the King but quickly realized it wasn't any fun. I had more or less given up on the idea of an Evil Dead game until my good friend Kain of Deadites.net hooked me up with a copy of Evil Dead: Regeneration. Looking at the box, the concept seemed interesting: a semi-sequel to Evil Dead 2 that takes off from the end of that film, pretending that the whole trip-to-1300/Army of Darkness never happened.

In the game's storyline, Ash (voiced by Campbell) has been committed to a mental institution run by Dr. Reinhard (prolific voice actor Jim Ward), a mad scientist-type, complete with thick German accent, who seems quite fascinated by Ash's copy of the Necronomicon. Reinhard predictably reads the book aloud and blah blah blah demons are unleashed on Earth and start possessing innocent people. Now only the one-handed but well-armed Ash stands between humanity and demonic armageddon.

Actually, that's not quite true. Ash has a little help in the form of Sam (no doubt named after Sam Raimi), a pint-sized Deadite who still has his soul and is basically a good guy - albeit one who can die time and again and come back to life. 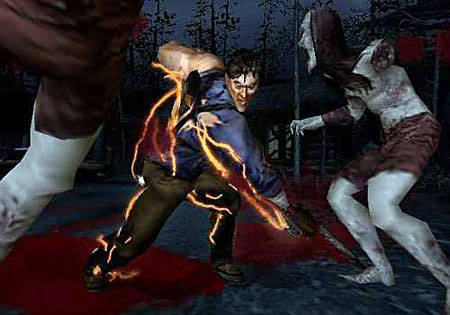 What I loved about Evil Dead: Regeneration was the way it took concepts from Evil Dead 2 and incorporated them perfectly into the game's mechanics as well as the storyline. For instance, in ED2 Ash is twice turned into a Deadite himself, though both times he manages to return to his humanhood. In Regeneration, when the player has killed enough Deadites and filled a special meter, Ash can "hulk out" into Deadite Ash, complete with super-strength and a heavy metal soundtrack, for a brief time. While not necessarily in line with the Evil Dead mythos, it's a creative use of the film's story and just one of a number of fun game mechanics.

Another fun aspect - and the one that won me over - is Sam. Sam's greatest gift is that he can be killed repeatedly and always returns to life. Therefore, you can punt him into just about anything; bonfires, monsters' mouths, pits, and so forth, and he'll always come back to you. In fact, you'll need to do things like shoot him, set him on fire, and boot him down monster gullets in order to beat the game. You can also kick him onto lesser monsters and he’ll pull their heads off while you're dealing with the big bads.

As I mentioned, there are also some cool references to Evil Dead 2's storyline. One odd moment in ED2 occurs when the dead Professor Raymond Knowby appears as a ghost (in cheap clown-white make-up) to give some advice. It's an interesting scene that provides some exposition but ultimately leaves you wondering: what the hell happened to Knowby and why is he a ghost now? That question doesn't actually get answered in Regeneration, but Knowby does appear several times to explain the storyline to dimwit Ash and provide advice when needed.

Also, the infamous "rotten pumpkin" monster from the end of ED2 reappears here in a somewhat different role.

Regeneration doesn't offer absolutely state-of-the-art graphics, but they're still quite good, especially the facial expressions on Sam and Ash (even if Ash looks a little bit like a berserk Woody from Toy Story).

The audio, however, is a different story. Campbell is firing on all cylinders as Ash, but what really makes the game is the banter between Ash and the mini-Deadite Sam, who is voiced by Ted Raimi (Sam's brother, who played Joxer on Xena) with a thick Brooklyn accent and a tough-guy attitude. Some of the one-liners between the two of them are priceless:

Ash: Hey Napoleon, open that gate for me and make it snappy.
Sam: I don't know who you think you are, but I demand respect!
Ash: Oh, you want respect? Stop complaining to my crotch!
Sam: OOOOH! You just made a big mistake, buddy. You've messed with the wrong midget! I'll shove my boot so far up your ass, you'll need a shoehorn to swallow!
Ash: Well, even your temper's short!

The rest of the sound effects, from the Deadite screams to the boom of Ash's boomstick, are also well done and quite clear. 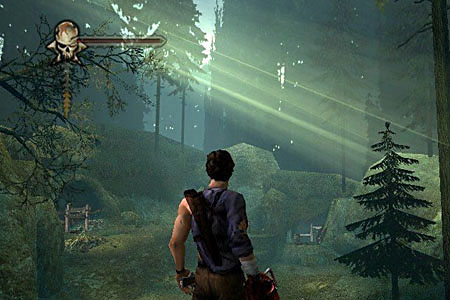 But how's the action? Predictably, it's really fun. In addition to his classic chainsaw-and-shotgun combination, Ash gains a number of secondary weapons through the storyline, including a grappling gun and a flamethrower for his "mechanical" hand, and a new gun: the bomb-lance, a whaling weapon that was essentially a kind of 19th Century missile launcher.

One last thing I should mention is, for lack of a better term, the "direction" of the game. I don't know how much this occurred in the previous games, but the designers made an effort to mimic Raimi's distinctive manic style from ED2, right down to the crazy, comicbook-style camera angles and Three Stooges-esque comedy. The result feels more cinematic than some movies.

Evil Dead: Regeneration isnt perfect. It's not exactly a complex or thought-provoking gaming experience. It’s also a little short and a bit too easy; using the grappling gun-and-shotgun combination, you can destroy almost any enemy in five seconds. But most of that is negated by its bargain $30 retail price; for $30, this game packs in more fun than games for which I've paid twice that amount.

This entry was posted in blog exclusive review and tagged Evil Dead. Bookmark the permalink.