No, I'm not giving away free toys, but I might be able to help you get one.

Starting in the summer of 2006 with Series 9, Jakks Pacific included a replica WrestleMania ticket with all the Classic Superstars figures - collect all 22, and you can send away for an exclusive figure. Originally the figure was unannounced, just touted as a never-before-released version of a Classic Superstar. Because Jakks knows what side its bread is buttered on, the figure turned out to be Hulk Hogan.

The original plan was to give us the Hogan as Mr. America, the masked character created when Vince McMahon was trying to screw Marvel Comics out of the money they were owed for use of the "Hulk" name. Of course, the "Mr. America" angle was a rip-off of Captain America, Vince's way of thumbing his nose at Marvel - that's probably part of why they decided to change the free figure offer. 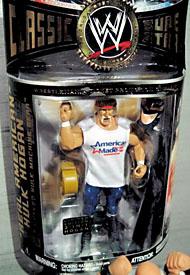 Now, instead of one figure, you'll be getting two - sort of. The "normal" figure is "American Made" Hogan, who features a newly tooled exclusive head, a removable cloth shirt, a removable cloth bandana and a plastic weightlifting belt.

Additionally, the figure comes with a black singlet and a cloth mask to turn him into "Hulk Machine," from his brief appearance in The Machines, a tag team inspired by Japanese pro wrestler Super Strong Machine. So you're getting one figure, but enough accoutrements to turn him into two characters. If you send in all the tickets.

If you're a regular reader of our "WWEdnesday" reviews, you know that I like the Classic Superstars line, and I've bought quite a few of the figures. That means I have quite a few of the tickets. Not enough for me to seriously consider hunting down the others, but enough that I figured I'd offer them to any fans who might want them.

I've got the following tickets available:

If you want any of those, just let me know. I'll be more than happy to help you get your limited edition Hulk Hogan exclusive. According to the packaging, you only have until March 15 to send in your tickets for redemption, so don't wait too long. And if you know someone who might be interested, spread the word.

This entry was posted in announcements, lists and tagged wrestling. Bookmark the permalink.