It's been a while since we last looked at hawflakes'/eMummy's Xevoz designs, so here's a new set: 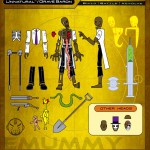 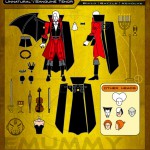 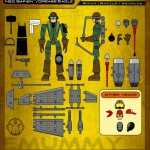 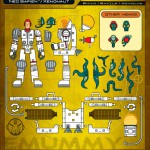 Grave Baron's intestines are removeable like Franken'Punker's tubes. The snake can wrap around head or plug into chest, guts or eye socket. Also he makes a good lab/doctor/scientist with the normal head and parts on like the shirt and tie chest plate. There is a removeable ribcage plate and also a small heart which pegs into the left chest cavity. The shotgun would hinge open, and the Baron Samedi head is almost as cool as the "brain" head. The yellow thing is a ghost that would hang off his shoulders.

Sanguine Tenor is very much in the Alucard mold, but look at those alternate heads: Phantom of the Opera, Nosferatu, Gary Oldman, and even a female head to go with the alternate female torso! Also two kinds of neck ties, and a stake that has a peg so it could actually plug into his chest! The cape/bat wings are perfect for him, too!

The Grease Eagle looks super complicated. There are tonnes of ways you could assemble that giant flight pack of his. The launcher actually looks large enough to function, unlike a lot of the pretend action features eMummy's designed. The scarf is fancy fancy!

Clearly, the Xenonaut is an astronaut who's been possessed by an alien, which is just awesome! Especially since you can build him AS a plain astronaut, and then have varied ways to show his infection progressing. If there were some way to assemble all the pieces into a complete alien, this would be the best idea ever!