It's been years, but eMummy is back with more designs! 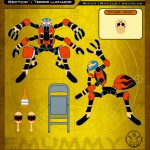 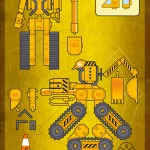 The Terror Luchador is way cooler than the last spider Sectoid he made - it's a red-kneed tarantula, which translates beautifully to a Mexican wrestler. The Dia de los Muertos skull head is terrific fun, but the folding chair beats it all! It beats everybody! Over the head! With a folding chair!

If General Contractor proves anything, it's that designing Biomecha is tough! It's a nice enough design, but it lacks the Xevoz spark, I guess. And where are his organic parts? Remember, the Biomecha aren't plain robots, they're "Zyborgs." So they have squishy meat-parts!