Remember a few months ago when Minimates based on Tarot: Witch of the Black Rose were solicited? Well, forget it. 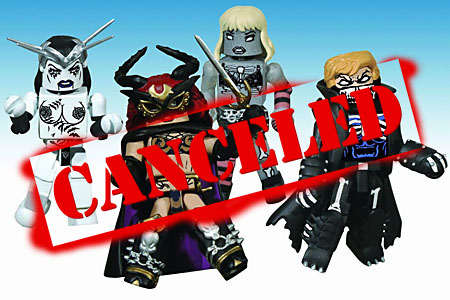 According to Luke's Toy Store, the set is officially cancelled from DST. He said Tarot had the lowest preorders of any Minimates set - and that includes the also-cancelled Godfather and Beverly Hills Cop Minimates. Bad news for the fans who preordered - all both of them.

Update: someone emailed Broadsword Comics to find out the real story, and Holly G! gave this response:

Yaa
Totally sucks
But because of an initial SNAFU
The set won't happen right away
But some ideas are in works
So hold tight!
Best Witches
Holly

So that's it, no Tarot. We have to think that soliciting them as 2½" figures, rather than the usual 2", hurt the interest. Or maybe it was just that nobody who reads Tarot is interested in toys with flat chests.

This entry was posted in Art Asylum, cancelled toys, news and tagged Minimates. Bookmark the permalink.